This Cream of Mushroom Soup with Crispy Leeks is a very easy soup recipe for a weeknight meal because it comes together in under 30 minutes or less. It's also gluten-free and easy to veganize too!

The crowning glory is the mound of crispy leeks on top, which are so flavorful and pretty. They are a great gluten-free alternative to croutons. But dare I say, even better tasting! 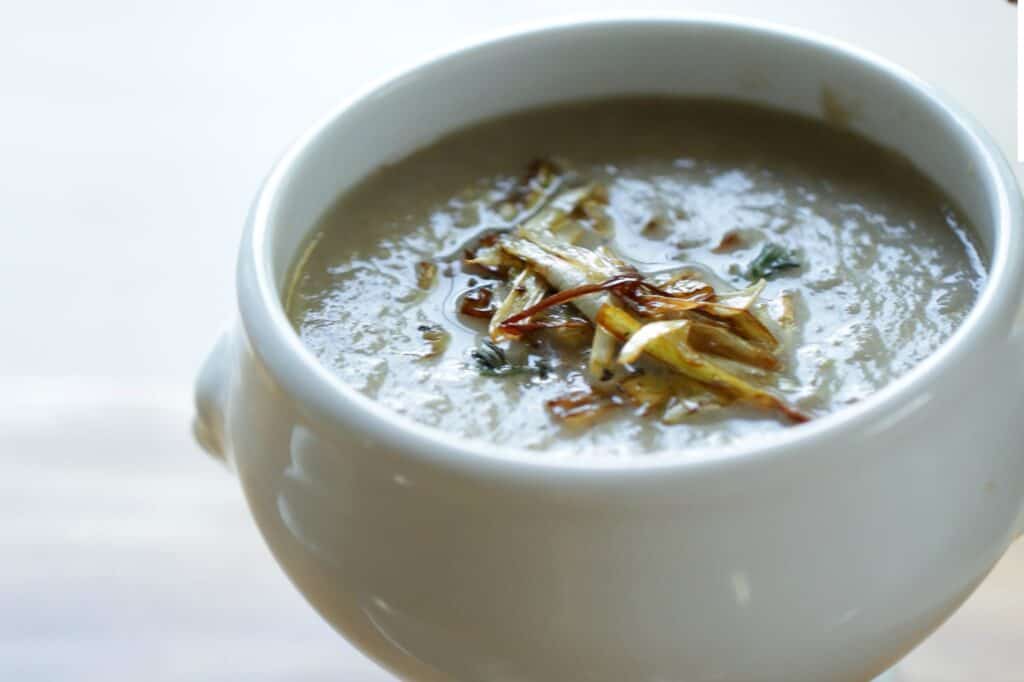 Why You'll Love This Recipe: 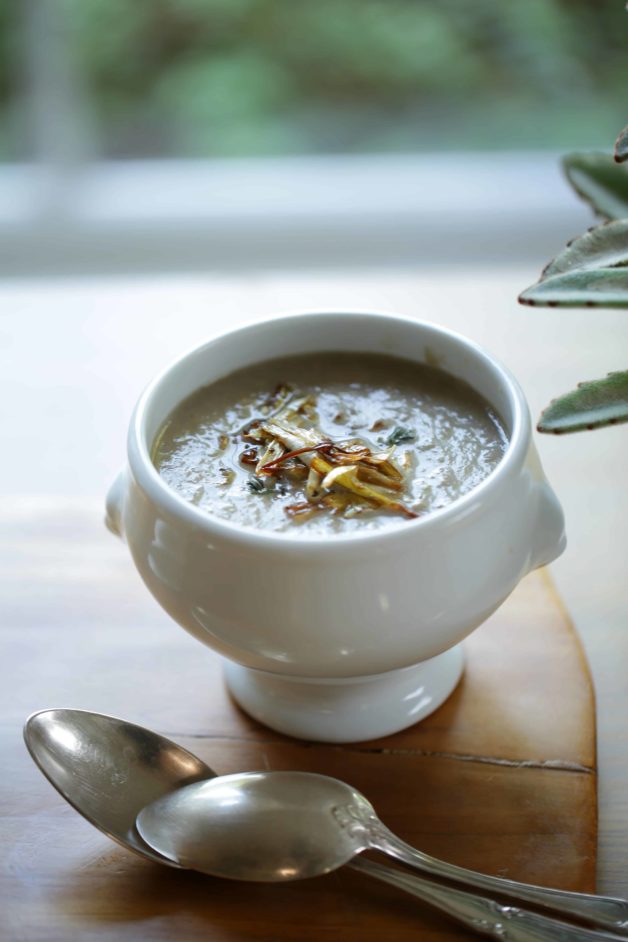 When Homemade is Worth the Effort

There are certain recipes that will also taste better homemade. Like pasta sauces, hot fudge sauce, waffles, and homemade mushroom soup is definitely on that list! It's nothing like the canned varieties. The flavors are much more pronounced without any of the heaviness. Especially during the colder months, you'll love how heartwarming and earthy it is. It feels like a warm cozy blanket on a cold winter's day.

Watch my Video Demo of this Recipe Below!

I always take the time to sautee the vegetables first, it brings out the best flavors while allowing them to marry. The combination of the leeks, mushrooms, garlic, and thyme gives this soup a fantastic depth of flavor. 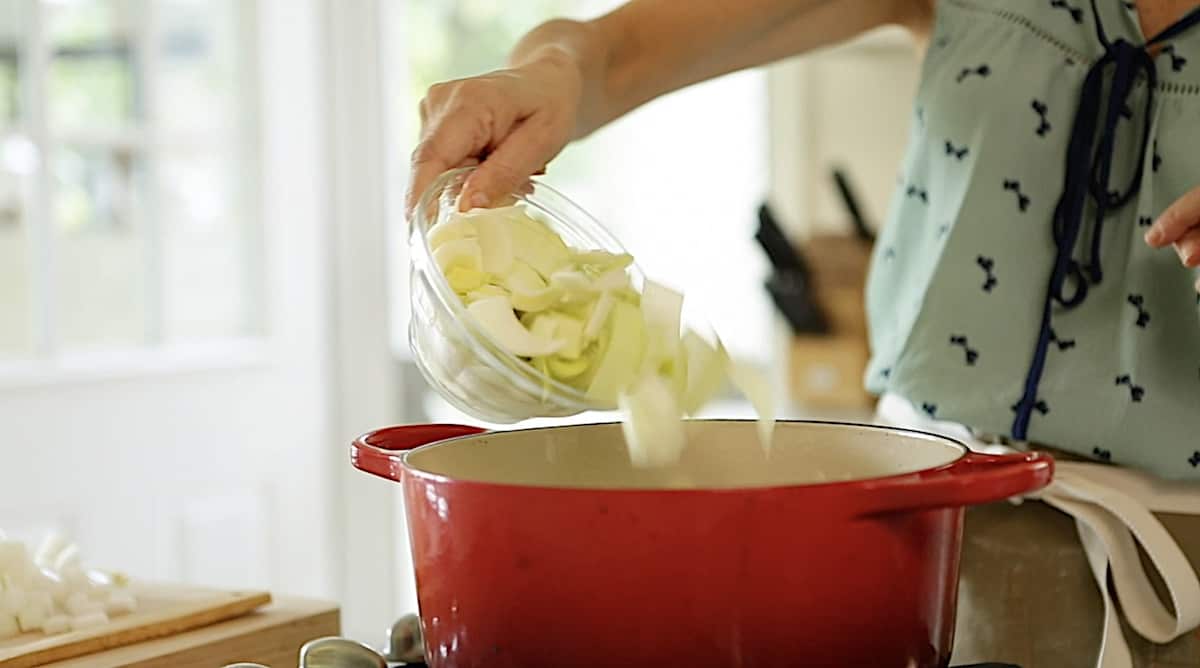 I like to use the pre-sliced cremini mushrooms from Trader Joe's because it makes this soup even easier! No slicing involved and it cuts down the prep time in half!  But you could also use white button mushrooms and slice them yourself if needed. 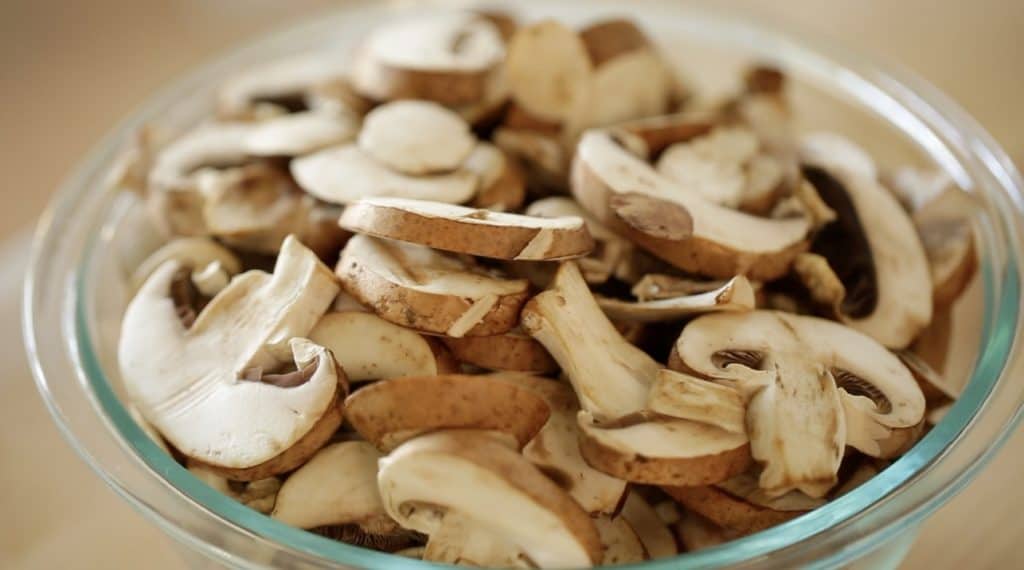 For this soup, I typically use chicken broth, but you could easily swap it for vegetable broth. Since the vegetables are already cooked through, you'll only need to simmer the broth until it's hot. 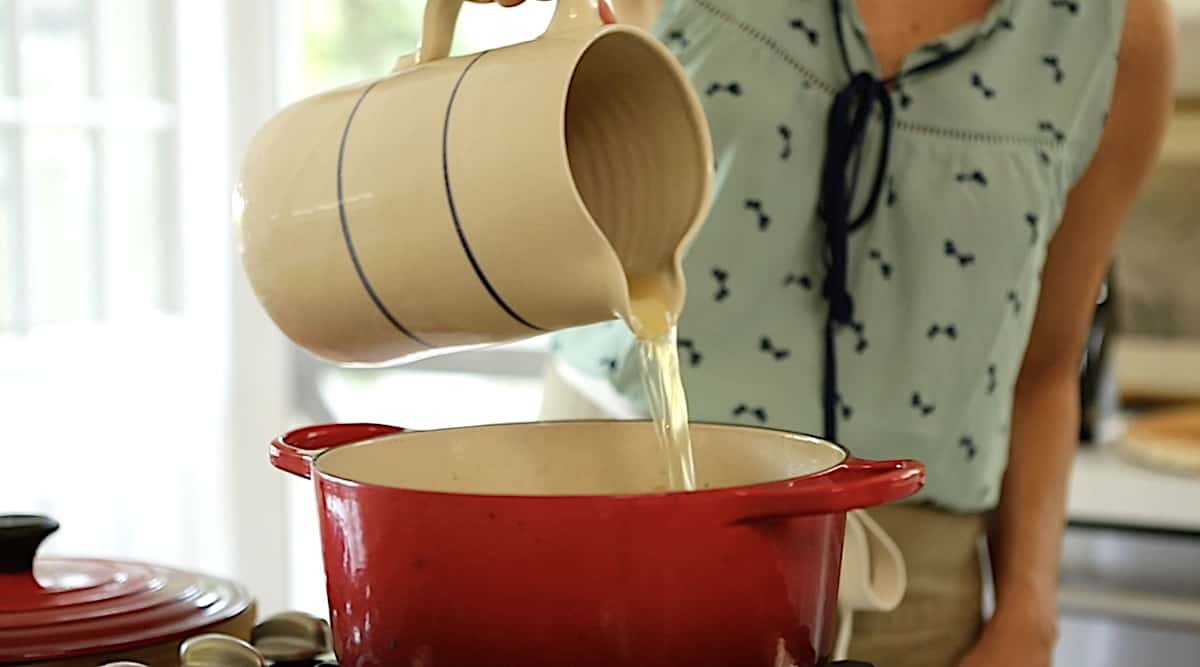 Once you saute up the vegetables and heat the broth, all you need to do is blend it up. And seriously that's it! It's almost like a veggie smoothie it's that easy! This is why I love this soup for a weeknight meal. 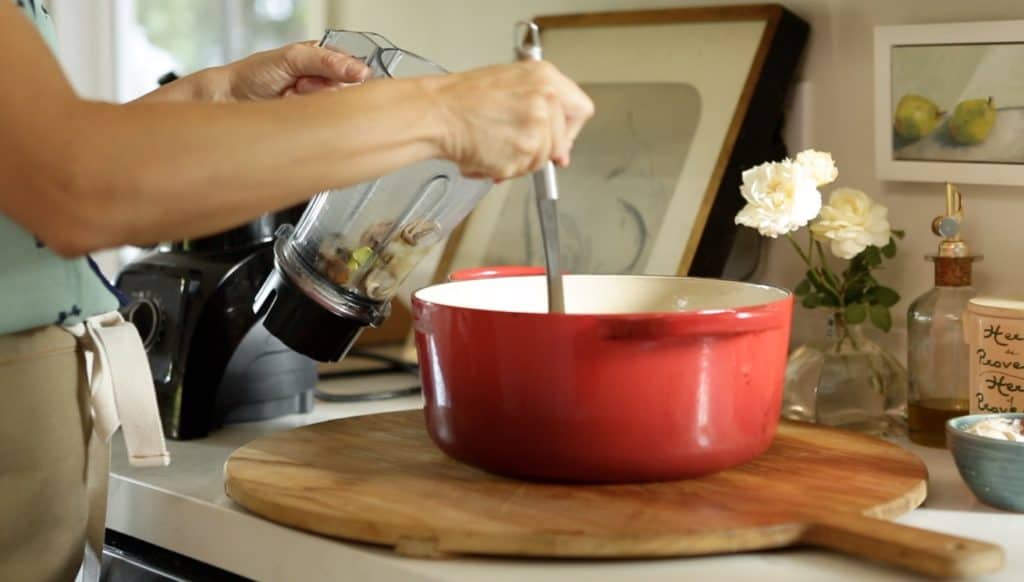 You could leave your soup a bit chunky if you wish for a more rustic texture, but I prefer to take it all the way to a smooth puree. 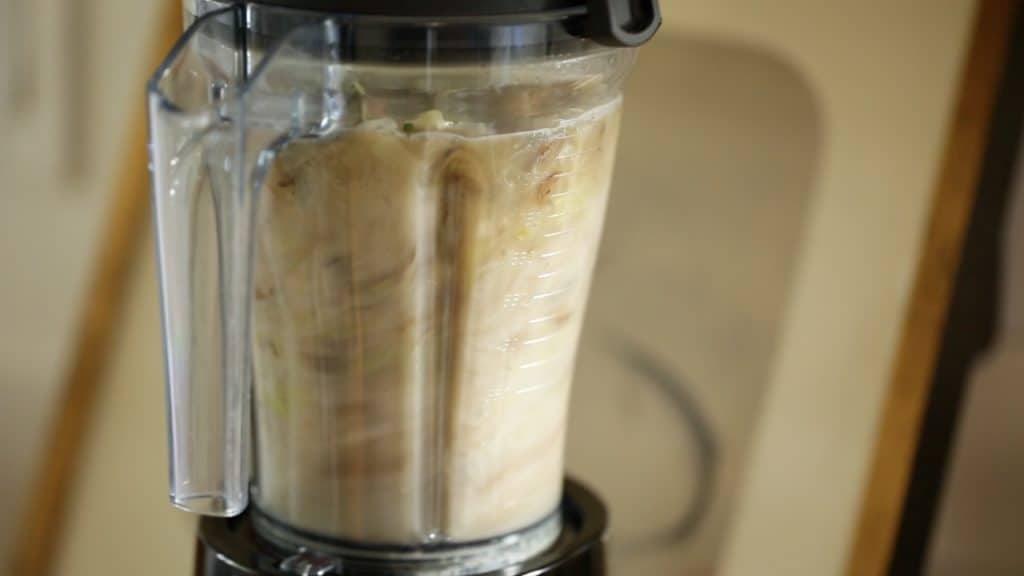 STEP#4: Transfer the Soup and Season

Once the soup is blended to your liking, transfer it into a clean soup pot and season with salt and pepper. Then I also like to add a dash of heavy cream at this stage too, along with some additional freshly chopped thyme. 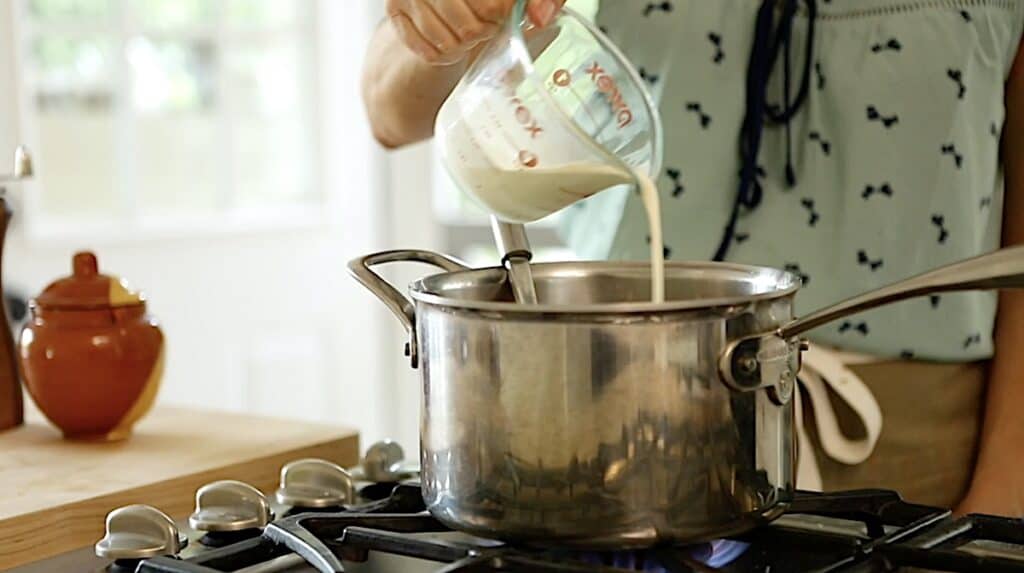 Add Chicken To Make It a Hearty Meal

How To Make The Crispy Leek Garnish

I think the best part of this soup is the crispy leeks on top, they add so much flavor and a little bit of texture. They are also really easy to do! Leeks are an often overlooked vegetable but add so much flavor. They are particularly good in my Potato and Leek Soup Recipe, another great soup recipe to try.

You could make the mushroom soup a day or so before, re-heat it, and then all you would have to do is fry the leeks before serving. 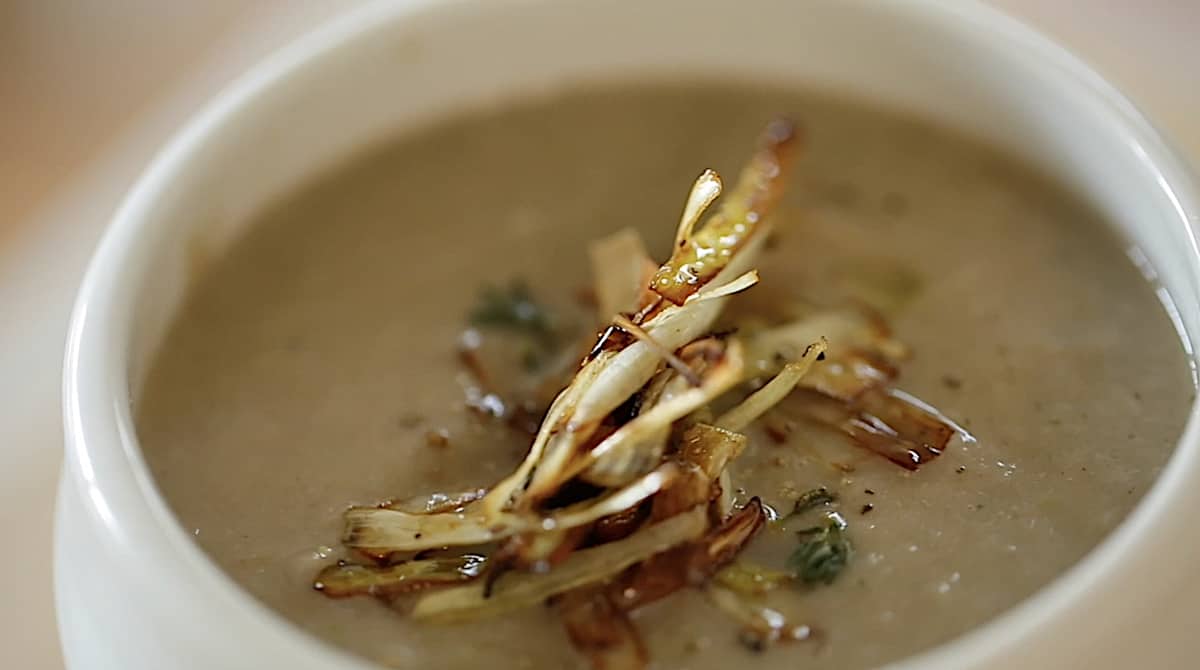 Slice off the white parts of the leeks, you can reserve the green parts for soup stock. Just pop them in a resealable plastic bag and freeze them until ready to use. 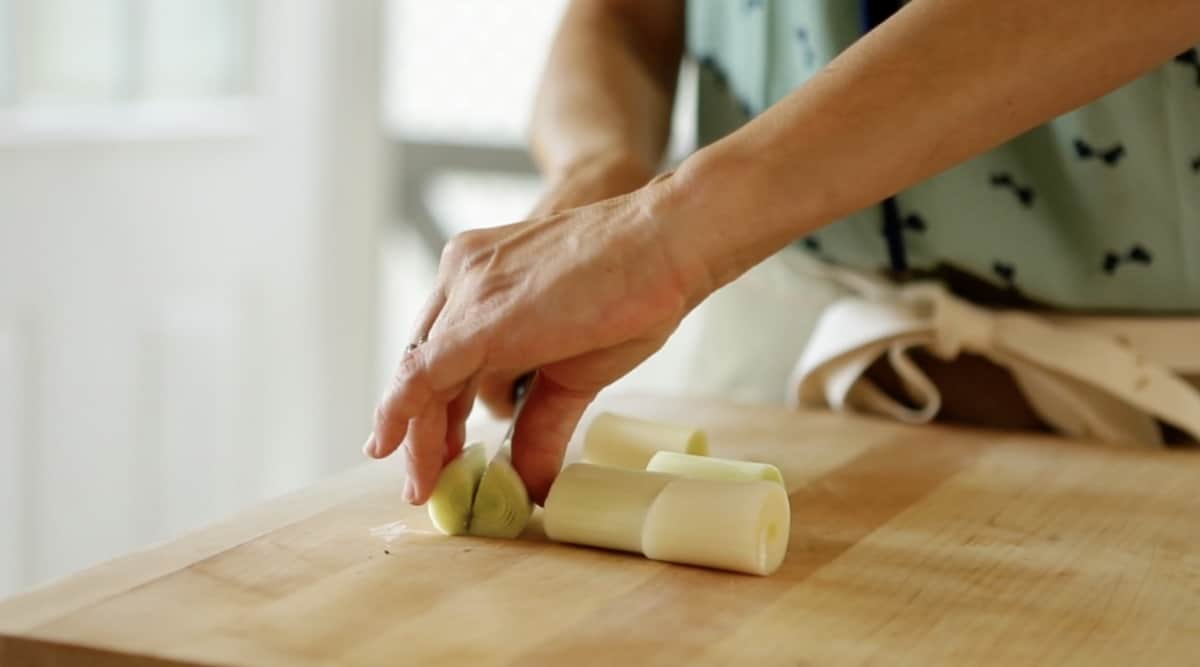 Slice the white part of the leek in half and then create thinly sliced matchsticks of leeks. Place them in a skillet with olive oil, season with salt and pepper, and allow them to fry until crispy. 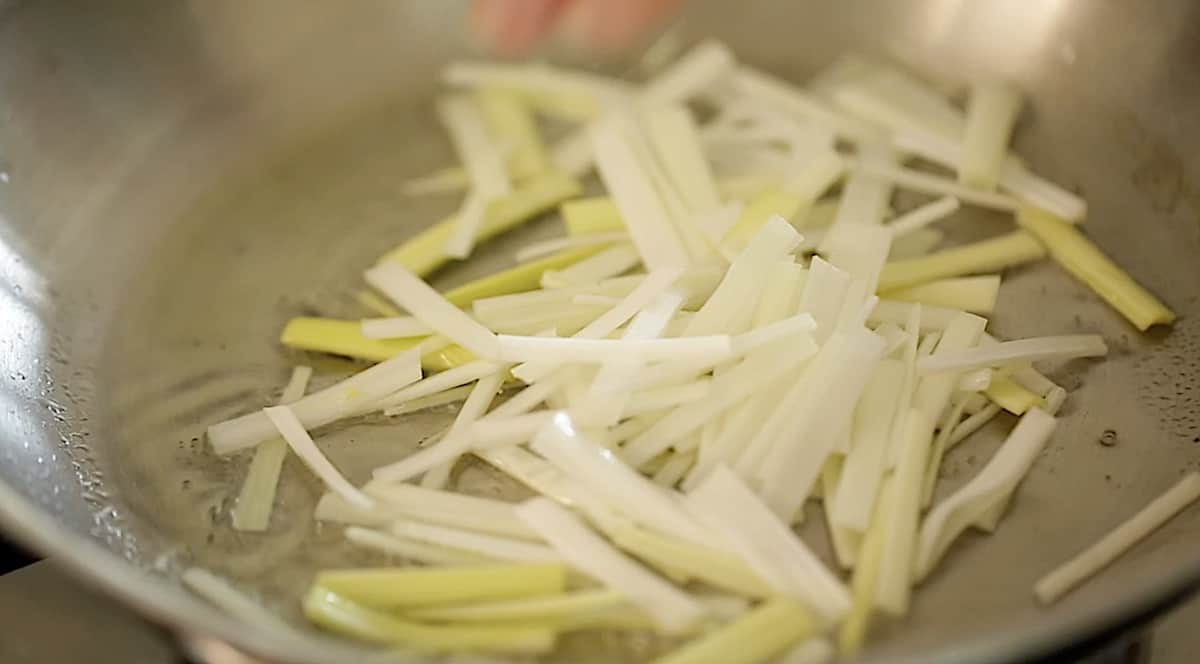 How to Get the Crispiest Leeks

Resist the temptation to toss them too much. They do better if you can allow them to fry untouched for a few minutes, only turning them once they get some nice color on them.

These crispy leeks are also a great addition to an omelet, along with a little Gruyere cheese, it's a fantastic flavor combination that also works well in my Mini Quiche Recipe too. 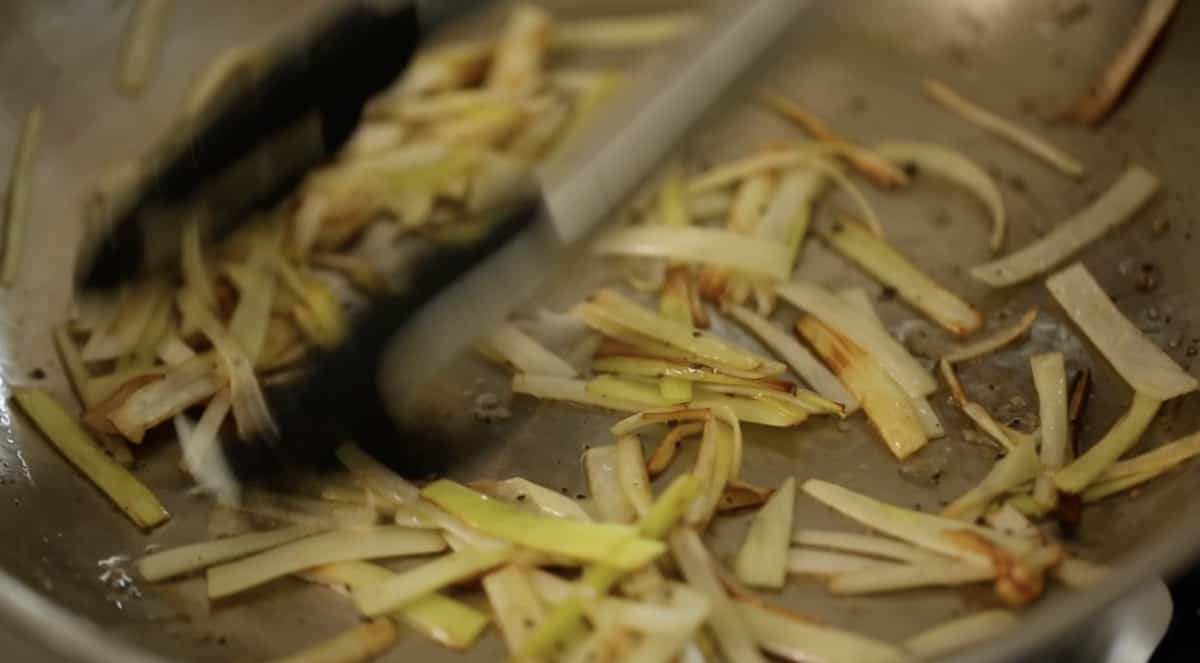 Ladle out your soup into a soup tureen and let everyone serve themselves! This is also a fun idea for a soup buffet for game day or award show season too! 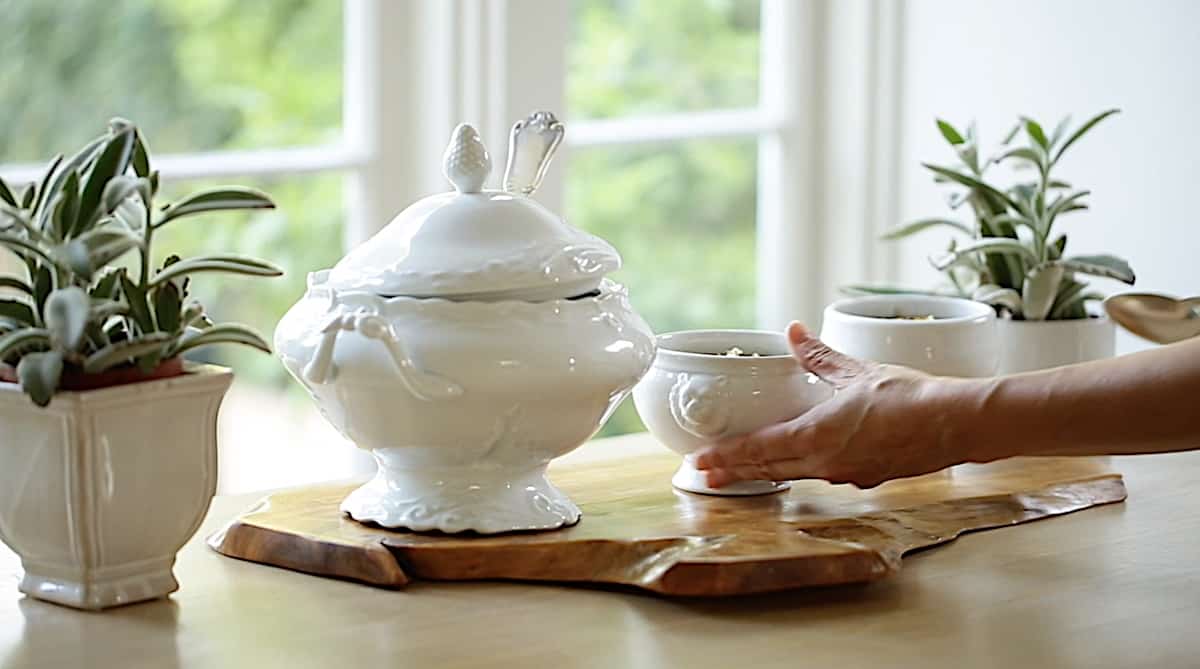 This soup also freezes beautifully! Allow it to cool completely, then place in a freezer-safe container and freeze for up to 3 months.

To reheat place in the microwave on high until warmed through