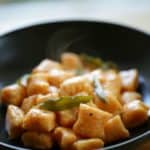 A delicious Sweet Potato Gnocchi with brown butter and sage sauce. This is a great fall dinner recipe for a cozy Sunday night meal! I won't lie it takes a bit of time to make, but it's a fun "weekend project" that can go pretty quickly if you have some friends or relatives around to help!

Have extra sweet potato on hand? Try my Sweet Potato Biscuits with Sage. One of my favorite bread recipes for Thanksgiving!

I used to hear the words "Homemade Gnocchi" and kinda roll my eyes a bit, in a who-has-time-for-that kind of way! Until I actually tried it and let me tell you it's really not that bad folks and SO worth the effort! Especially when you can flavor them with seasonal twists like sweet potato and nutmeg. 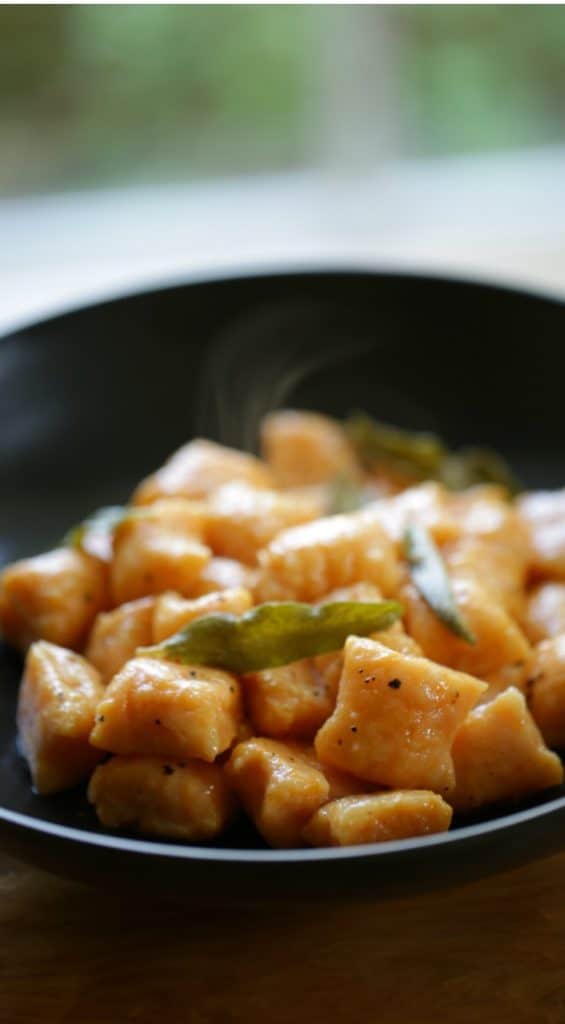 In fact, my Dad was telling me stories about how he remembers growing up in his Italian-American family and witnessing his mother and grandmother at the kitchen table chatting and rolling and cutting, all these homemade gnocchi. 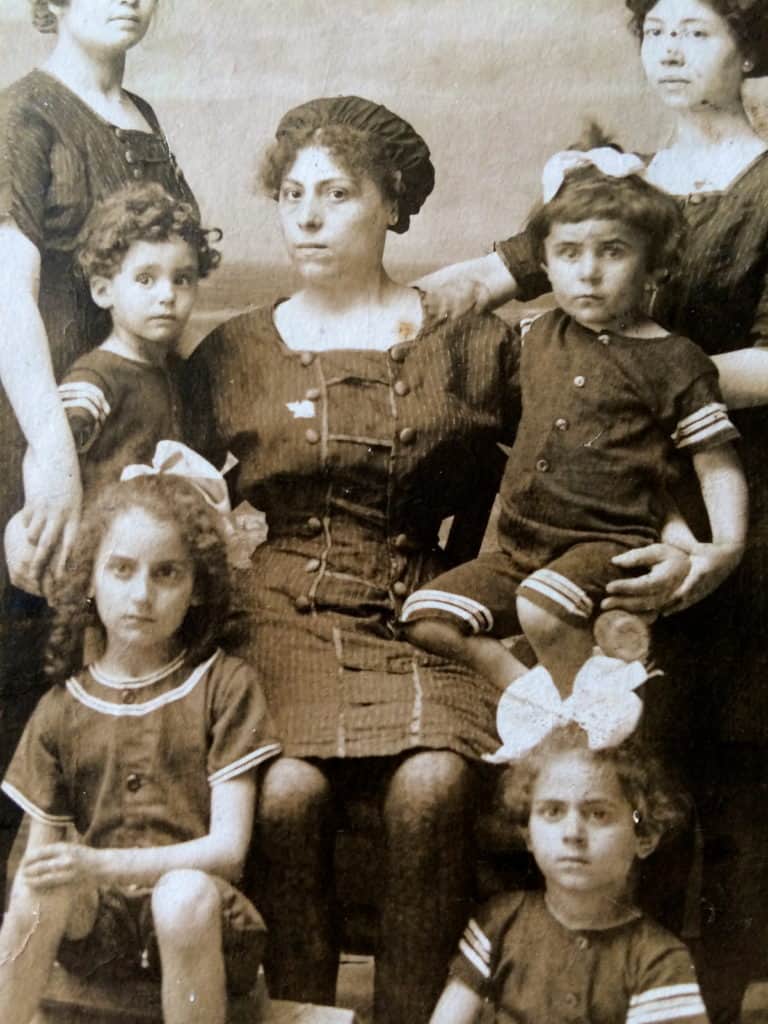 Sounds like such a lovely image, no? I try to remember that when I'm knee-deep in gnocchi dough with just a few cuts ha! But once you sit down and tuck into these little pillowy morsels of heaven, all the effort will simply just melt away! 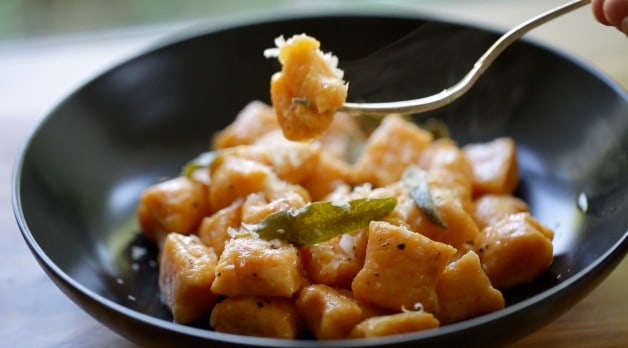 WATCH MY VIDEO ON THIS RECIPE BELOW!

Can you Use Any Potatoes for Gnocchi? 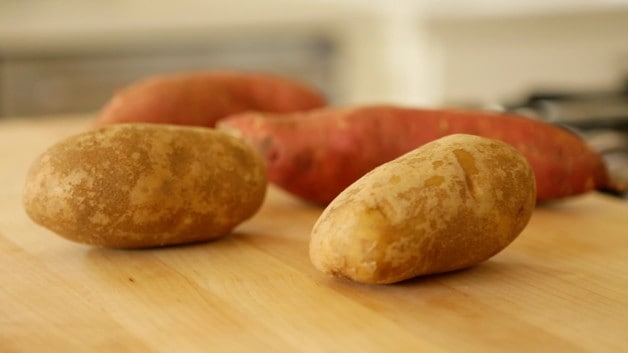 A waxy potato has a lower starch content and will keep its shape after it's cooked. Waxy potatoes are best for roasted potatoes or smashed potatoes. 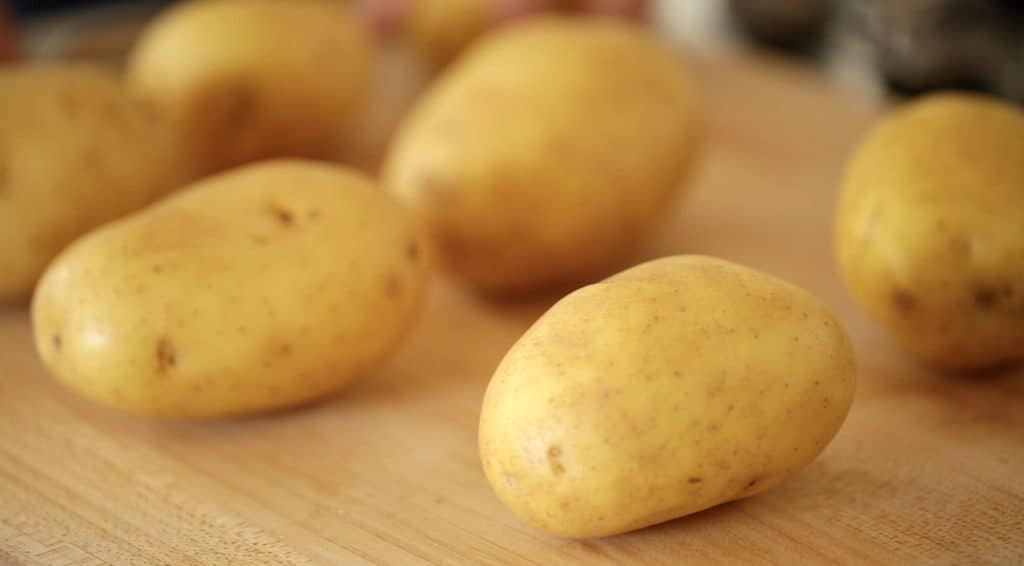 Rub each potato with olive oil to help the skins come off easily after they are baked. Poke each one several times with a fork to allow the steam to escape. 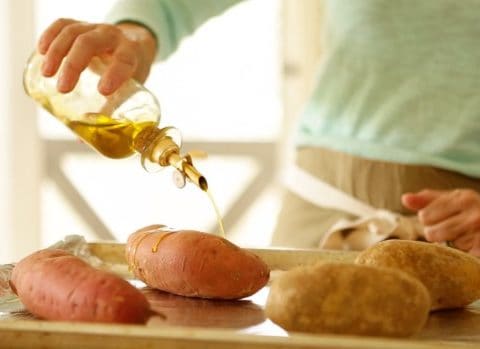 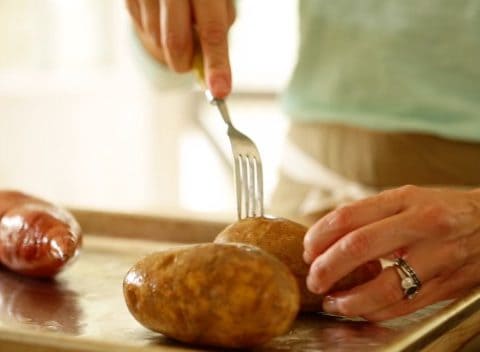 Place in a 400F (200C) degree oven for about an hour or until the potatoes are tender. Flip every 20 minutes or so to avoid browning. 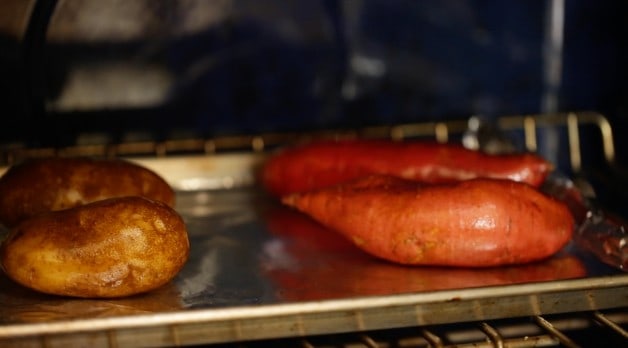 Remove the potato skin and cut the potatoes into quarters. 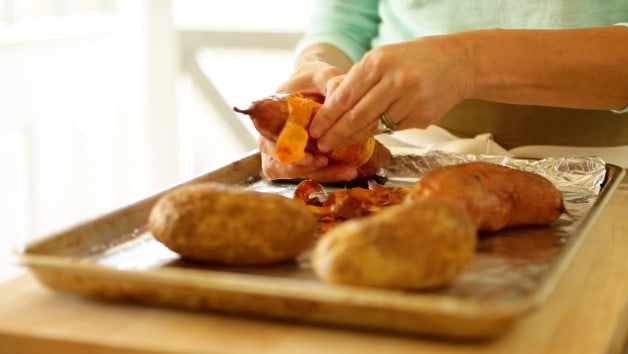 Put the potatoes through a ricer and squeeze potato pieces through it. If you haven't used a ricer before it's a miraculous invention that gives you the smoothest most beautiful potato mash, which is exactly what you want for gnocchi. The ricer is also great around Thanksgiving time for the smoothest, mashed potatoes, or for the topping of my vegetarian Gardener's Pie. 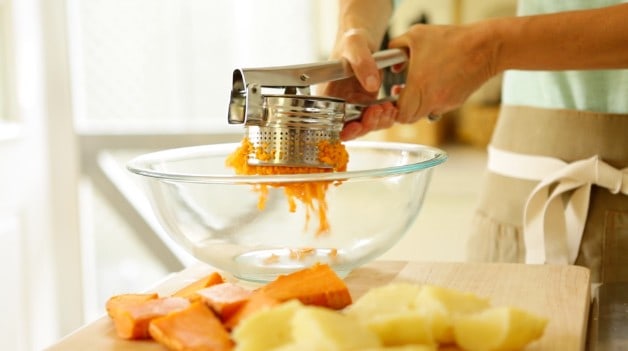 Make a well in the center of the potato mash and add the egg, salt, nutmeg, and part of the flour. The idea is to try to get away with the least amount of flour possible. You should use just enough to bind it together. Otherwise, you'll end up with tough gnocchi. 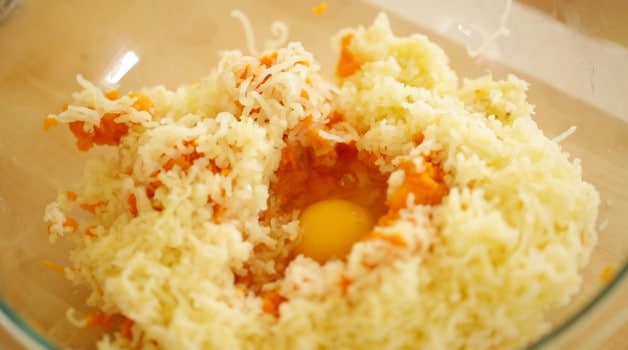 Stir the mixture with a fork until a dough begins to form. Then, take the remaining flour, add a little at a time, kneading it into the dough, until the dough can be handled easily without sticking to your hands. 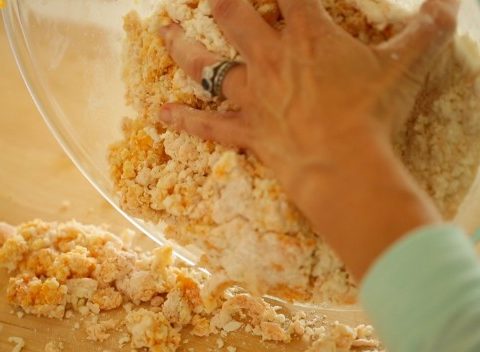 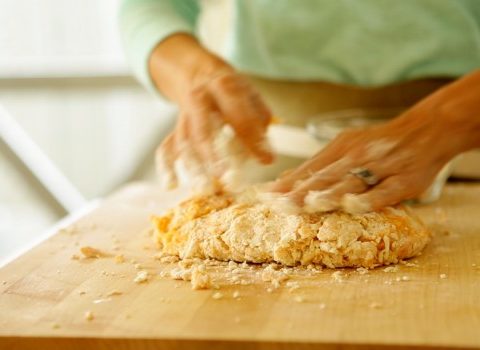 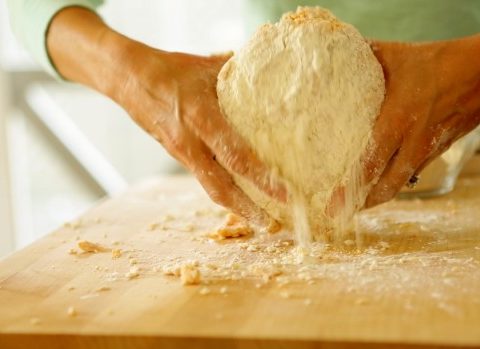 Cut off about a tennis ball-sized dough piece and roll out like a snake. Then, cut the gnocchi into one-inch pieces using a knife or bench scraper. 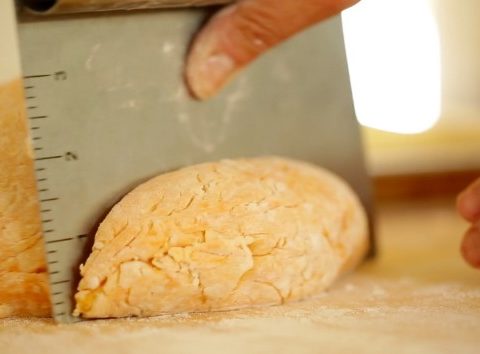 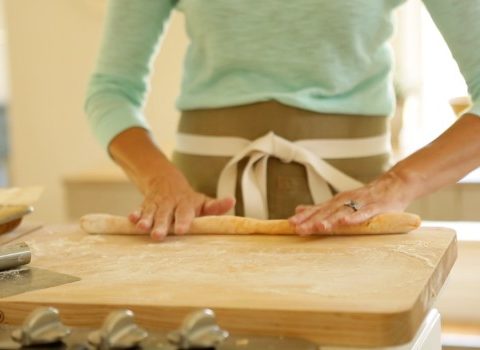 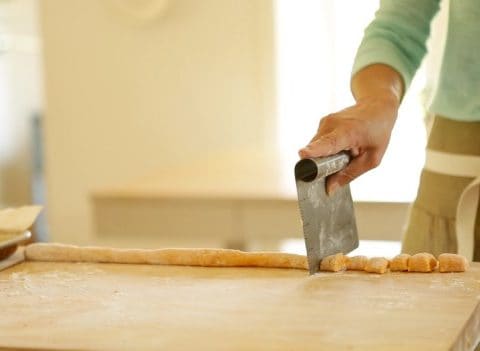 At this stage you have 2 options: 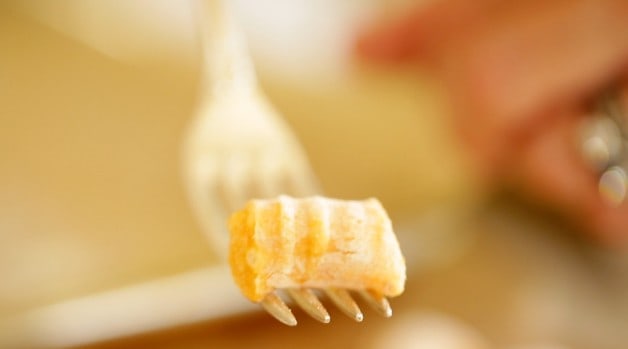 After all the gnocchi is cut, layer them on a baking sheet lined with parchment paper and place them in the freezer until frozen - about an hour or so.

TIP: To prevent the gnocchi from sticking, dust the parchment paper with a little flour first. 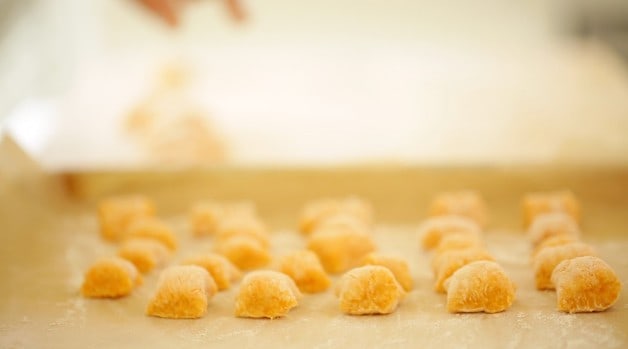 After the gnocchi is frozen you can cook and serve! 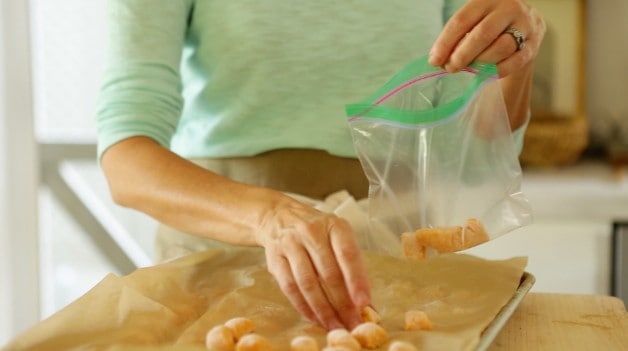 Can You Freeze Sweet Potato Gnocchi for Later Use?

Yes. But it's better to freeze the gnocchi as individual pieces instead of one large dough ball. To store portion them out into sandwich bags and freeze until you are ready to use them.

For some reason, gnocchi does not do well in the fridge. I think it's because the condensation gets too much for them and they turn mushy, then require more flour, which then toughens them up. So prepping them ahead of time and storing in the freezer is definitely the way to go!

The sauce has only two main ingredients and is super quick and easy to make!

Add the butter to a large pan. The pan should be big enough to add your gnocchi later, so plan ahead. 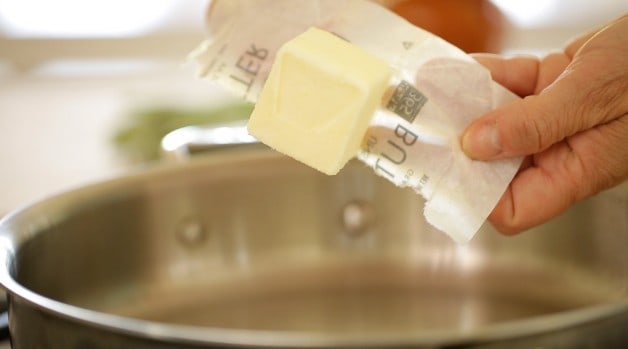 When the butter is melted and foamy, add sage leaves and season with salt and pepper. 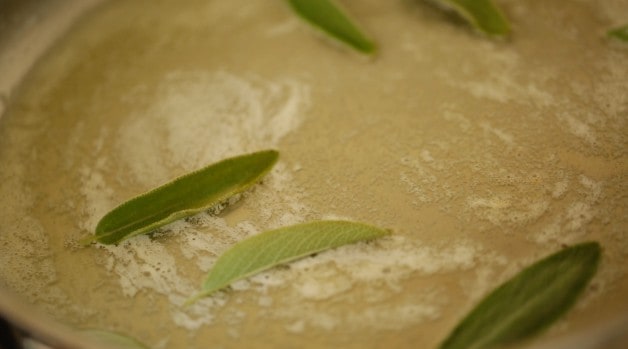 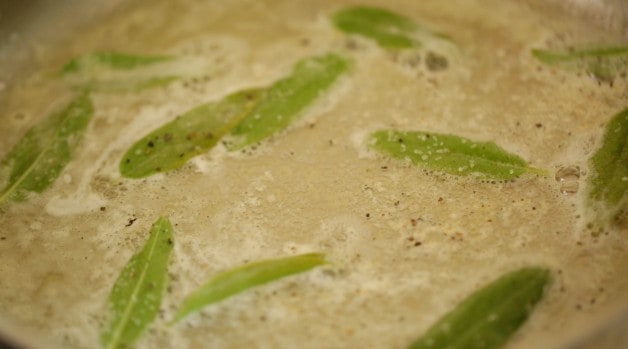 When the sauce is done, turn off the heat and set aside.

Step 4: Prep the Gnocchi and Serve

As the sauce is finished, it's time to prep the gnocchi. The great thing about homemade gnocchi is it only takes about 2-3 minutes to boil.

As the gnocchi rises to the top of the pot it's done! Remove them with a handled strainer or slotted spoon and place them in the skillet with the butter. 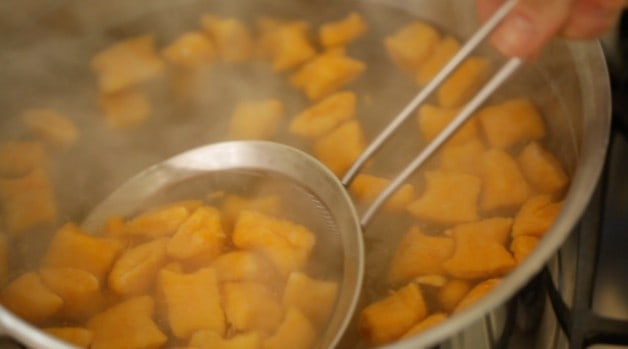 Gently toss the gnocchi with the butter and sage sauce until they are well-coated. 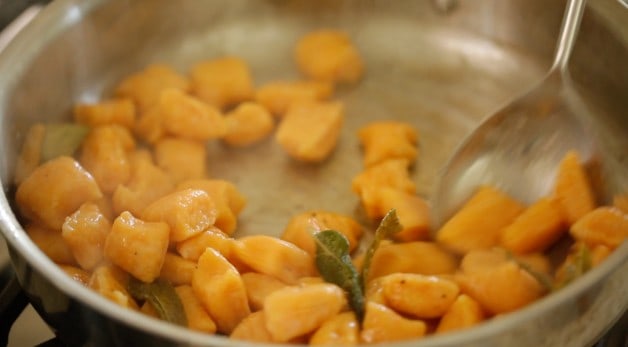 I like to add fresh Parmesan cheese to the top and then serve! 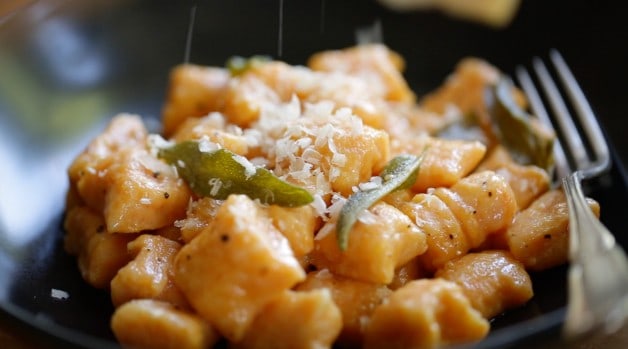 No time for homemade gnocchi? Try my Pesto Gnocchi with Summer Veggies, it uses store-bought gnocchi and only takes 15-minutes to make!

PLEASE LET ME KNOW IF YOU MAKE THIS RECIPE

BY LEAVING A RATING AND REVIEW BELOW!

For Sauce (for 2 portions)

These gnocchi can be made ahead of time. Just place on a baking sheet lined with parchment paper, in a single layer and freeze.

Once frozen place in a zip lock bag and keep frozen until ready to use.

Drop frozen gnocchi into boiling water and cook until they float to the top. Takes only a few minutes!