This easy baked mac and cheese recipe is the ultimate comfort food! It's one of my favorite Pasta Recipes that makes for a perfect Sunday night dinner. The best part? You'll have enough leftovers for the lunchbox the next day!

Next to Homemade Pasta Sauces, I think Homemade Mac and Cheese is totally worth the effort! It will taste 10x better than anything you'll get out of a box! 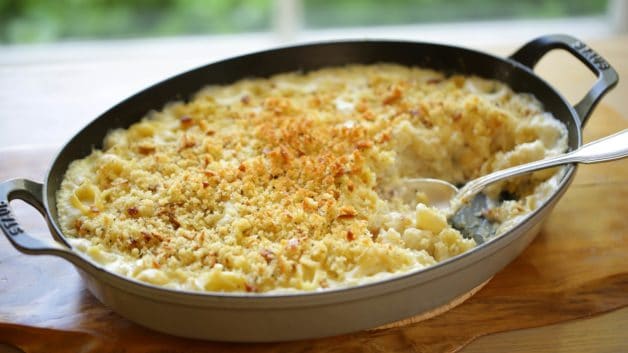 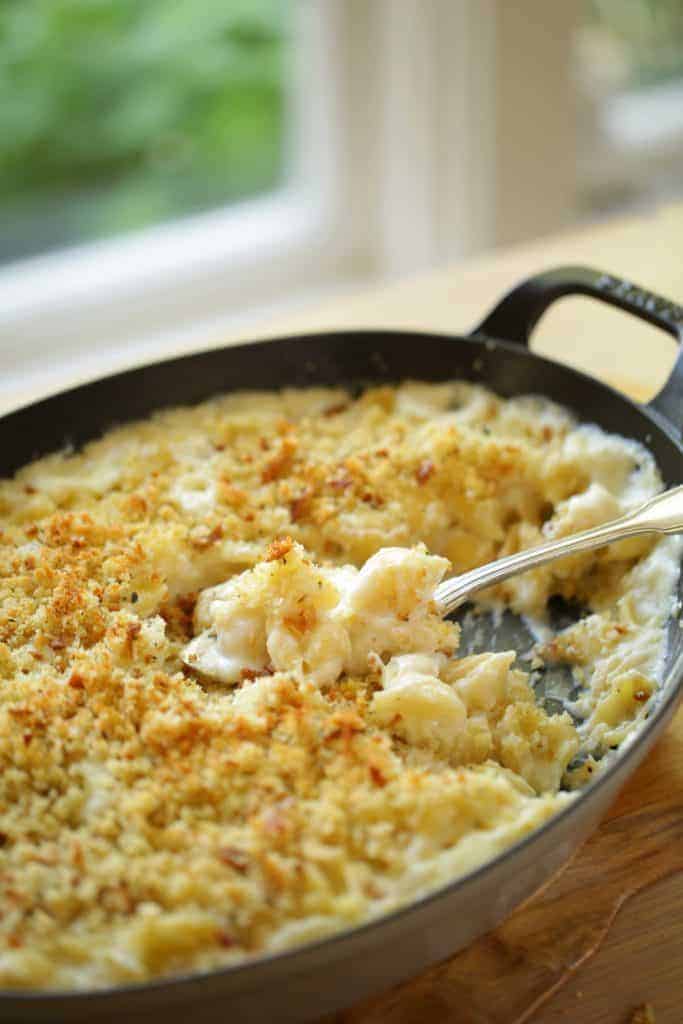 Watch my Video Demo of this Recipe!

Why You Will Love This? 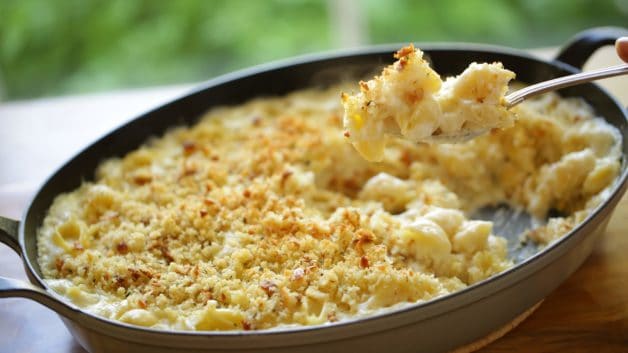 Boil pasta according to package directions. Drain the pasta once it is “al dente” and still has a bit of chew to it. 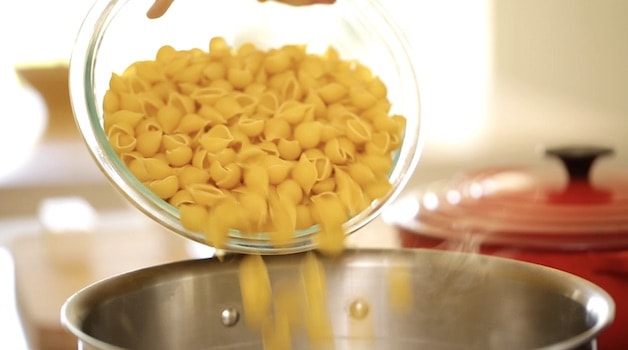 You don’t want to fully cook the pasta at this stage since it will cook further in the oven. It should just give a bit when piercing it with a knife. Overcooking will result in a mushy mac and cheese! 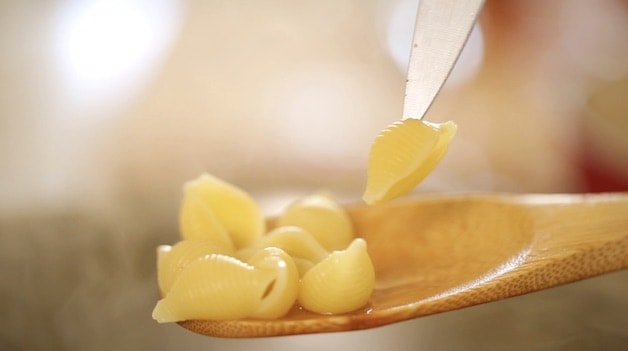 Even though traditional mac and cheese is made with macaroni pasta, I really prefer to use the small shell pasta for this recipe. I think the shells provide a better vehicle for holding the sauce and cheese! 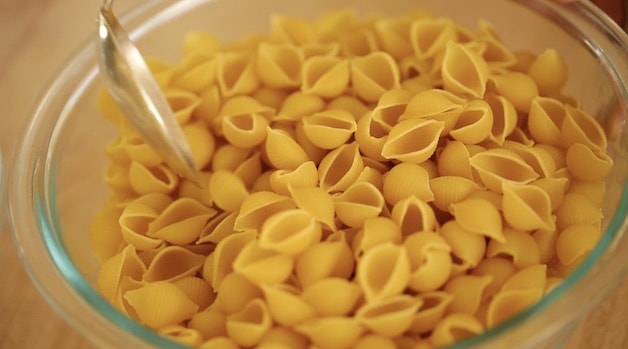 In a large pot, you'll melt the butter, whisk in the flour to form a paste, then slowly add the milk, whisking constantly until smooth and creamy. Season with garlic, salt, pepper, and nutmeg. Simmer the sauce until it thickens. 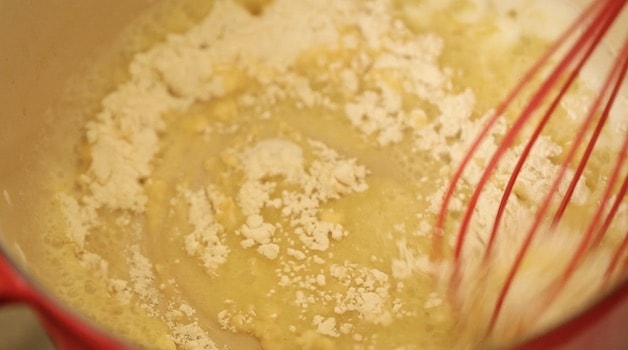 What is the best cheese to use for baked macaroni and cheese?

Personally, I think a 3-cheese combination is the best for Mac and Cheese. I like to use a combination of white cheddar for gooeyness, gruyere for flavor, and parmesan for a little nuttiness. 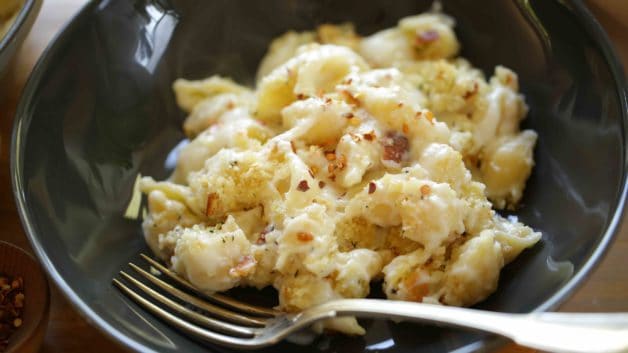 Do You Need to Add an Egg?

Personally, I say no. I know there are folks who will disagree with me on this one, but I find the flour in the sauce thickens the cheese sauce and binds the mac and cheese together so there really is no need for egg in this recipe.

Step#3: Toss The Pasta with Sauce

Transfer pasta to a large bowl. Pour cheese sauce over the pasta and stir to combine. It will look like a TON of sauce, but it will get absorbed into the pasta as it bakes in the oven. 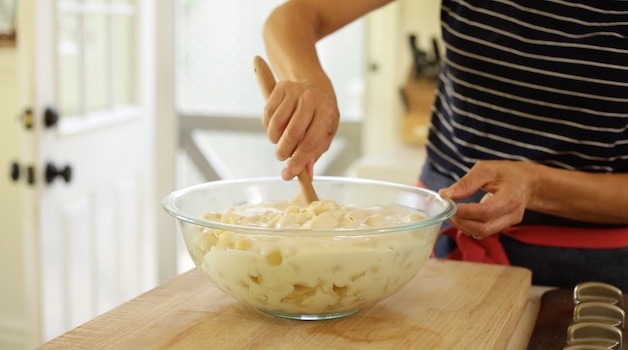 There's nothing worse than a dry mac and cheese and this compensates for the fact that the liquid will get absorbed into the pasta as it bakes. The pasta also needs liquid in order to cook through so the extra sauce takes care of both!

The finishing touch to this Baked Mac and Cheese is the homemade bread crumbs! It's really what sends this dish over the top. It's best to use rustic bread for the breadcrumbs. Something like a boule or sourdough loaf.

Once you fall in love with homemade breadcrumbs, you'll want to put them on everything! They are also fantastic on my Baked Zucchini Gratin casserole! 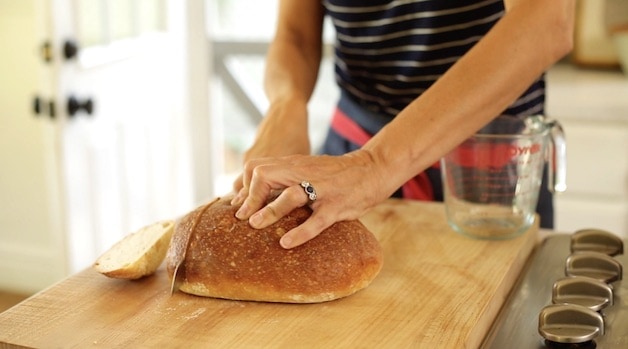 Cut the bread into cubes and place all the ingredients in a food processor and pulse until large crumbs form. Set aside. 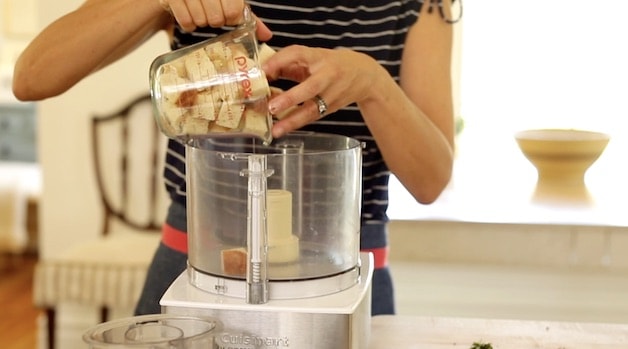 Getting the Right Texture for Homemade Breadcrumbs

Your crumbs should be finely ground but still a bit crumbly so that they crisp up on top. For this reason, I like to also include the crust of the bread since that will create some really delicious, crunchiness to your bread crumb mixture. 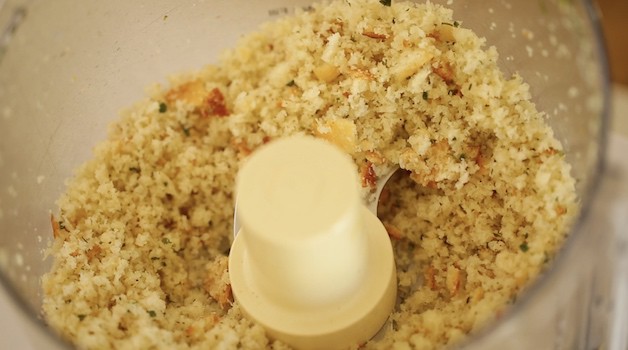 Step#5: Transfer to a Baking Dish

Make sure your oven-safe casserole dish is well greased and then top with the bread crumbs. Don't be timid, load them on there! You'll thank me after it's baked! It will seem like a lot, but once you serve the portions, everyone always wants more of the breadcrumbs.

Place in the oven at 375F and bake 20-25 mins until the mac and cheese is golden brown and the sauce is bubbling. 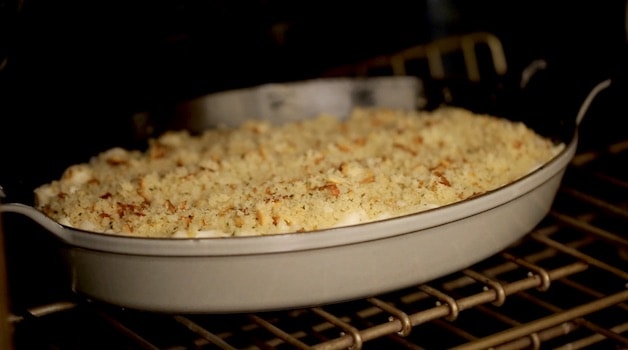 If you want your bread crumbs more “toasty” you can pop under the broiler for a few seconds two. Serve oven-to-table! 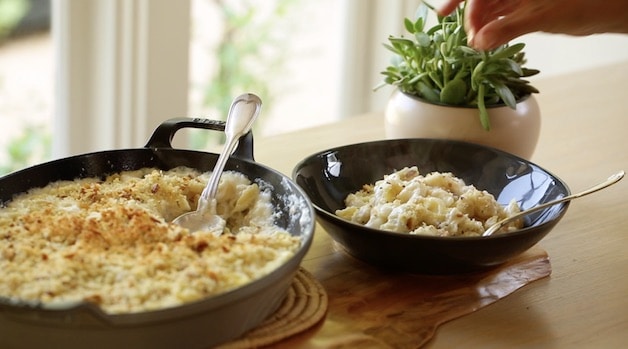 Please let me know if you make this Recipe

by leaving a rating and review below!

You could also add 1 cup of cooked crumbled bacon to this for a fantastic baked mac and cheese with bacon recipe!

Then before serving just boil the pasta, toss with sauce, and top with breadcrumbs and bake.

Making the pasta fresh and then baking right away assures your mac and cheese remains saucy. Otherwise, if you make a day ahead, place in gratin dust and bake the next day, the pasta soaks up all the sauce and you'll have a dry mac and cheese.

To freshen up leftovers, portion a serving out into a bowl, add 1 tablespoon of water on top, and microwave. This will loosen the sauce and make for a better, saucier texture.