This Easy Apple Crisp in a Cast-Iron Skillet is a fantastic dessert idea when you have a lot of apples on hand! Personally, I think it's even easier than an Apple Pie and just as delicious.

The sturdy skillet makes it very transportable too, so it's the perfect dessert to bring to a potluck and reheat just before serving! Looking for a summertime crisp? Try my Plum Crumble or my Blackberry Crumble. Both are equally easy and delicious! 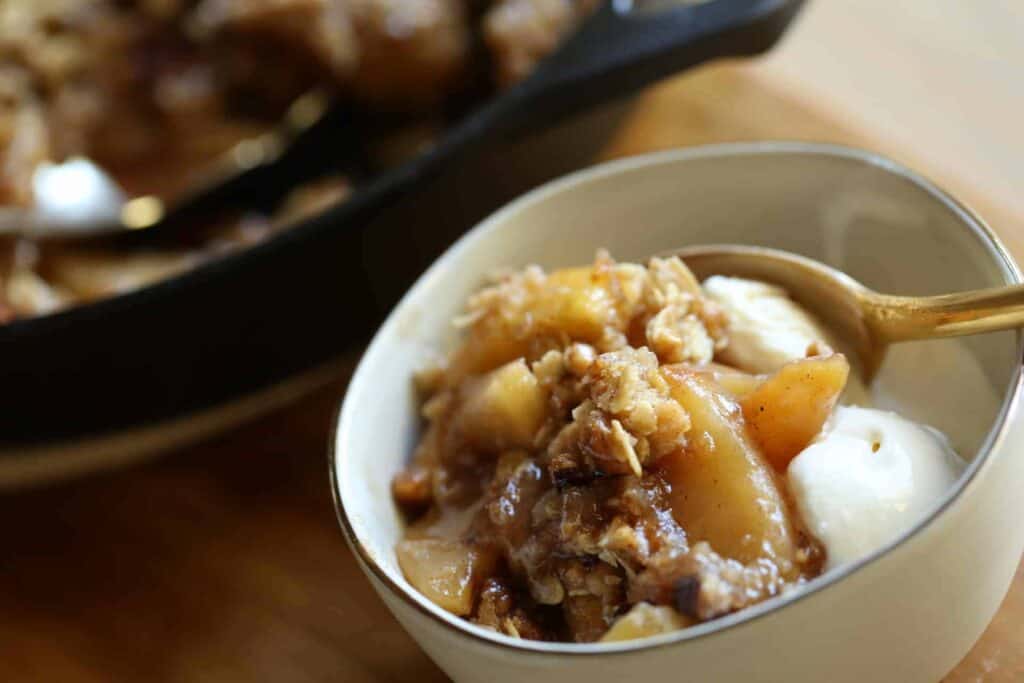 The Benefits of Baking in Cast Iron

I use it all the time, especially for things like my Sweet Potato Biscuits, Overnight Cinnamon Buns, or my Homemade Pizza. 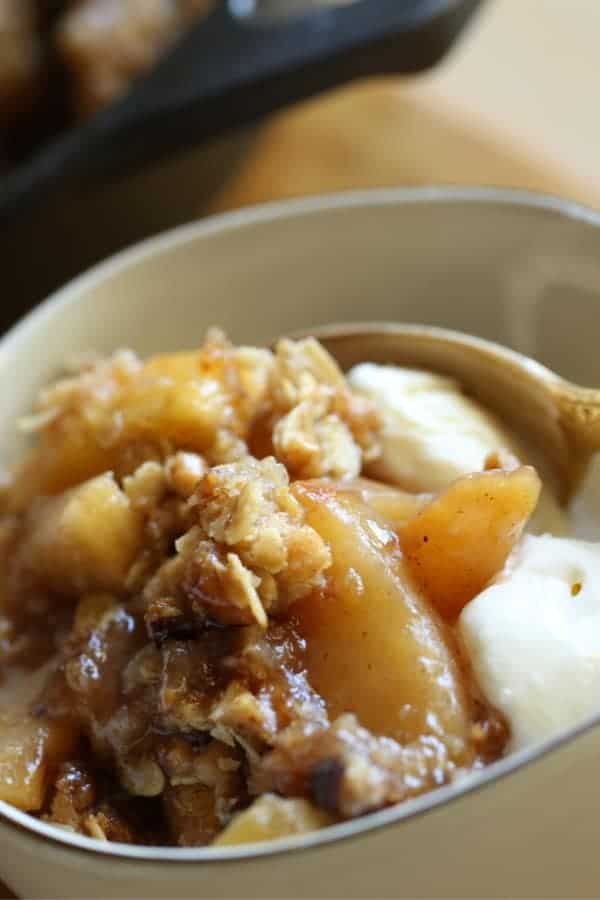 What Apples are Best for Apple Crisp?

Personally, I think Gala apples are best for apple crisp because they are sweet and juicy! I use Galas for my French Apple Tart as well. They also cook up quicker than Granny Smiths, which I think are better reserved for apple pie. 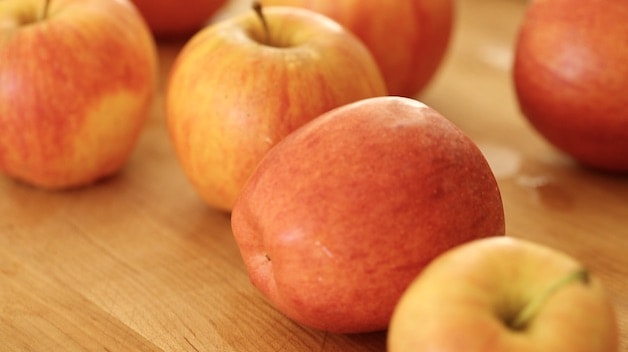 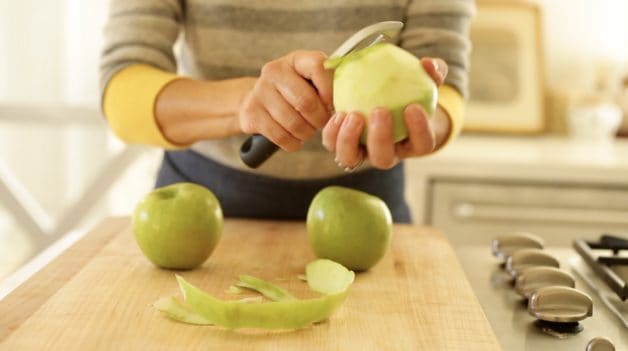 I also prefer the Granny Smith apples for an apple pie because they don't release much juice when they bake. This is ideal for a pie because it prevents a runny soggy pie after it's baked. 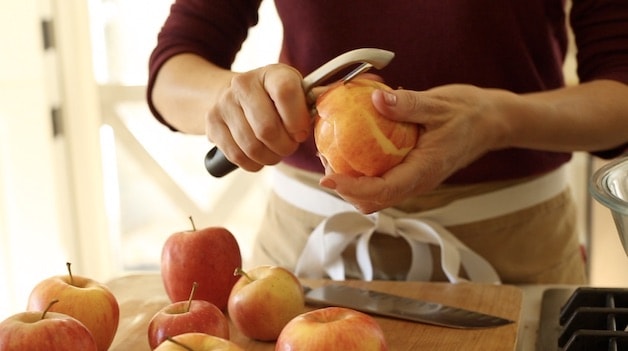 But for an apple crisp, you want a nice syrupy filling and the Galas are sweet and juicy and release their juices and become tender in just 30 minutes. As a result, they are my apple of choice for an apple crisp. 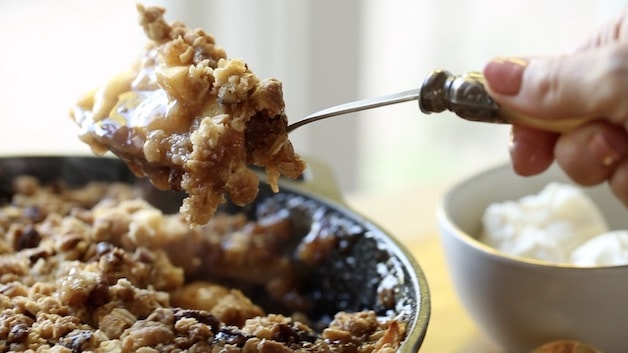 Be sure to leave the apples a bit chunky, more like wedges. Don't cut them as thin as you would for an apple pie, this will give your crisp a better texture. Then you'll toss the apples together with some cornstarch, white sugar, lemon juice, and pumpkin pie spice. 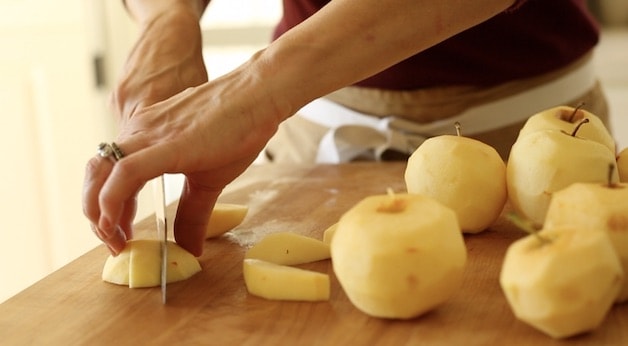 Can I Substitute Cinnamon for Pumpkin Pie Spice? 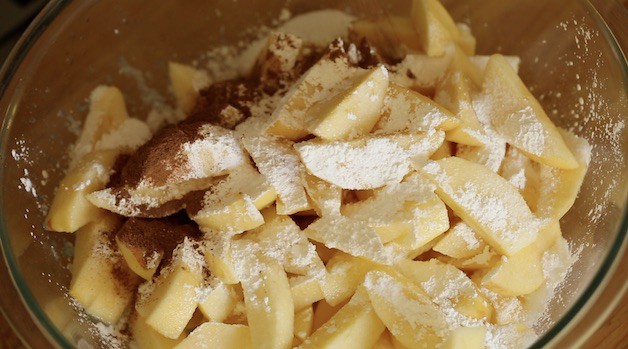 Step #2: Simmer Apples in the Skillet

Next, you'll give your apples a head start in the cast-iron skillet. This is why I love this recipe so much. It's so easy to go from skillet to oven, knowing that your apples are getting a head start to being tender and syrupy!

The syrupy texture is really the hallmark of a great apple crisp if you ask me. Let's face it, apple crisp is really a topping for ice cream cream, so the more syrupy, the better! 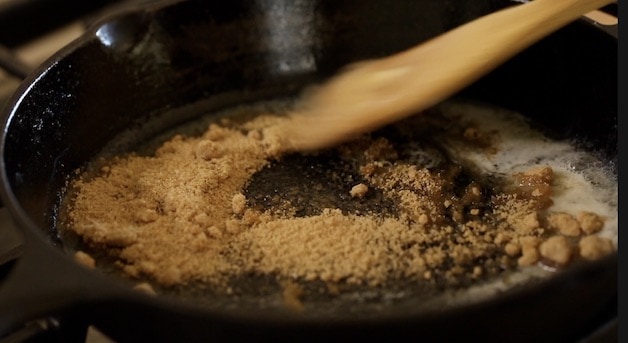 When to Add the Apples

Once the butter has melted and the brown sugar is added, it will form a paste, that's when it's time to add the apples. 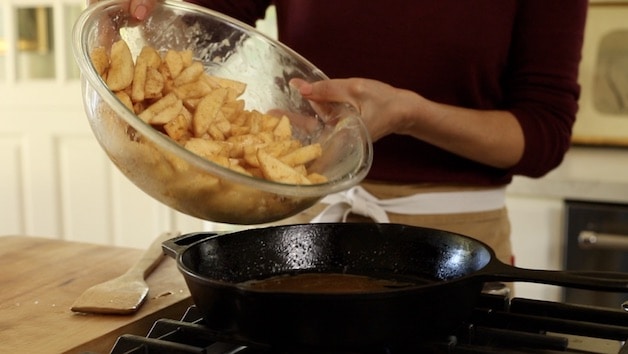 Let the apples simmer away on medium-low while you prepare the apple crisp topping. I love recipes like this when you can multi-task! Just keep an eye on your apples to make sure they don't become too dry. If that starts to happen add some water in tablespoon increments until juicy. 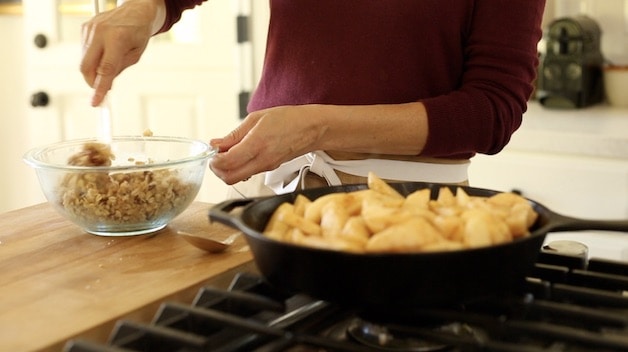 For me, it's all about the oats for a crunchy, crisp topping. You'll start by whisking together the dry ingredients, then stir in the melted butter. At this stage, you'll have a paste. 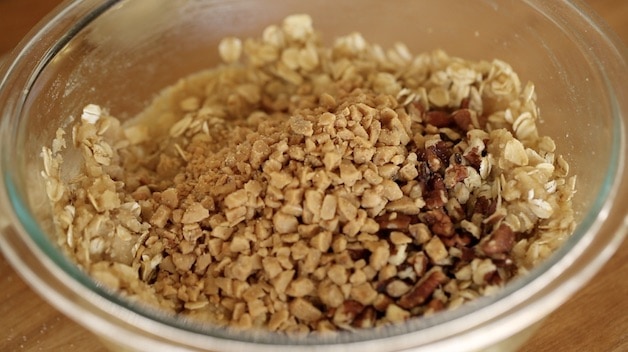 The Secret Ingredient to a Great Crisp Topping

Then stir in the oats, the pecans, and my secret ingredient...Heath toffee bits! The toffee bits add such a wonderful caramel flavor to the crisp once it's baked. 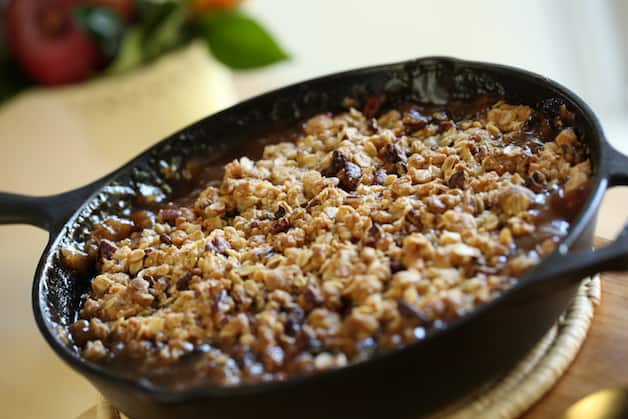 You can usually find the toffee bits in the baking aisle, next to the chocolate chips. Or I also buy toffee bits in bulk online since I know I use them so often around the holidays. I also use them in my Ultimate Chocolate Chip Cookie Recipe too! 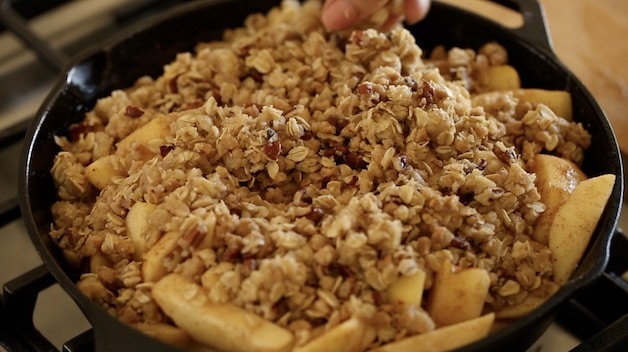 Step #4: Add The Topping and Bake

Sprinkle the crisp topping over the simmering apples and place the skillet in the oven at 375F for 30-35 minutes or until the topping is golden brown and the juices underneath are bubbling.

How Do You Store the Crisp After Baking?

Once baked allow your crisp to cool completely. Then cover your skillet with foil and refrigerate. As it sits overnight, the juices will thicken and congeal. 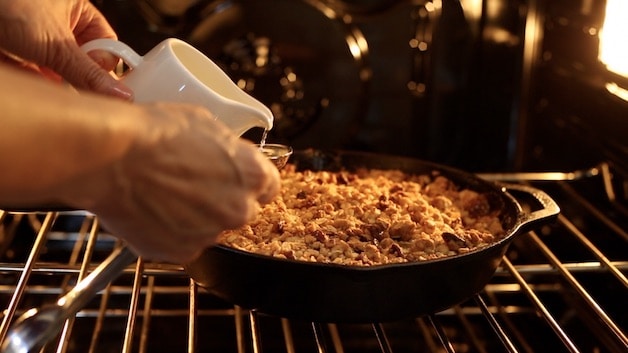 How To Reheat The Crisp 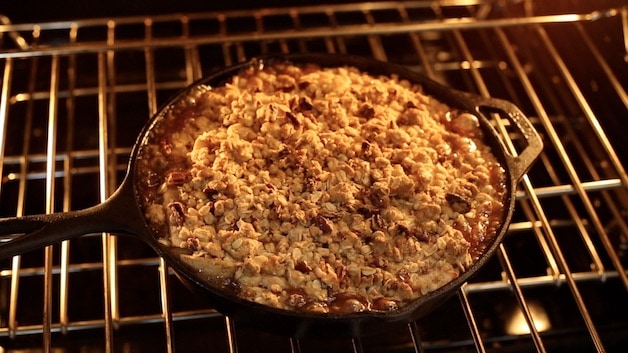 It should look like this! Crispy and saucy and ready to pour over some vanilla ice cream. The skillet is meant to go from oven to table, but just make sure you put a trivet down or a cutting board to protect your table! 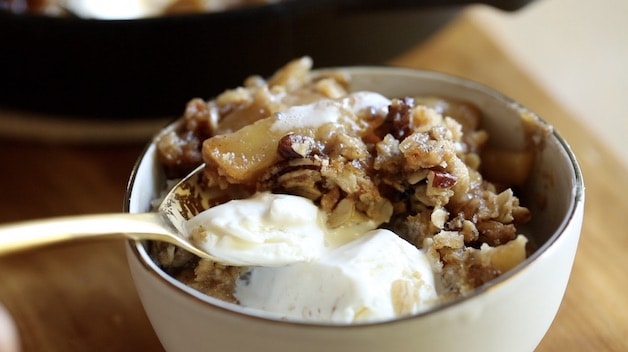 And let everyone dive in! I like to serve apple crisp in small bowls because it keeps the crisp extra hot and prevents the ice cream from melting too fast.

If You Enjoyed This Recipe

This recipe works well with any fruit! Try stone fruit in the summer like peaches, nectarines, or plums. Or apricots in the spring, or pears and cranberries in the winter.

How To Reheat The Crisp