This lobster thermidor recipe is a classic main course recipe that deserves to be in your repertoire. It's elegant and fancy and oh so delicious! It's the perfect "special occasion" dish that will impress just about anybody!

You can prep most of the components a day ahead and then fill the shells and broil. It's rich and decadent and so delicious too! 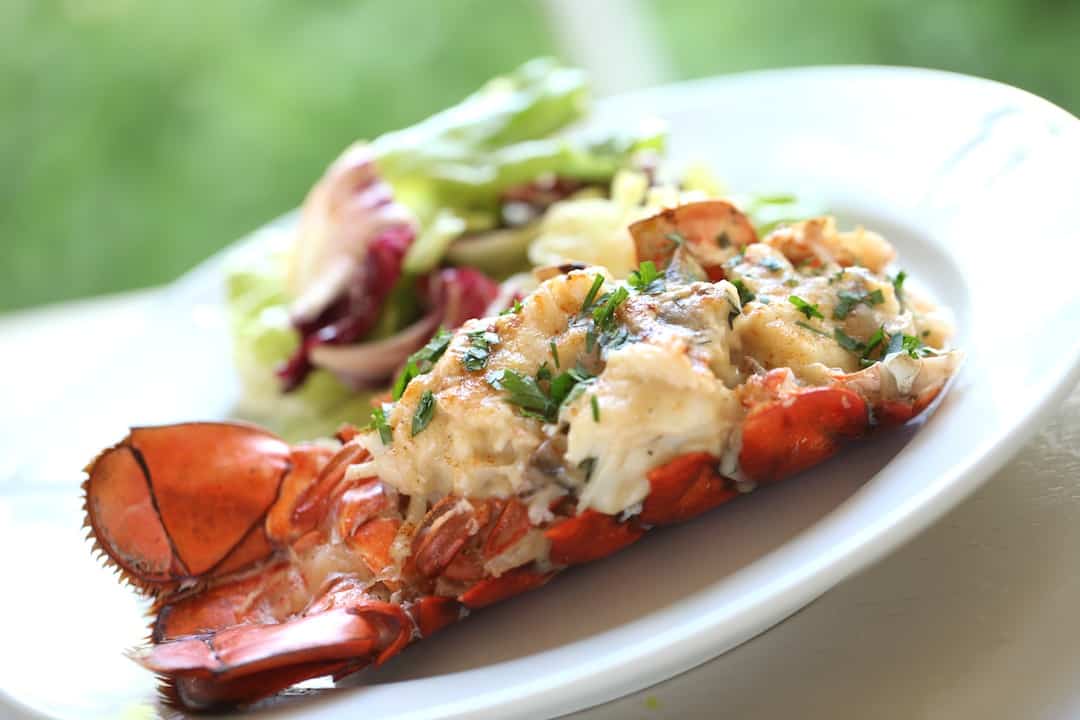 What is Lobster Thermidor?

Lobster Thermidor is a classic French dish of lobster meat and a rich cream sauce that is served in lobster shells and topped with a grating of melted cheese. It's is typically served for special occasions like Valentine's Day, New Year's Eve, or Christmas dinner.  It's similar to Coquilles Saint Jacques which is made with scallops and served in a scallop shell and is equally festive and delicious too!

How Difficult is This Recipe?

Lobster Thermidor is actually pretty easy to make. You'll begin by roasting your lobster tails, you'll get the best flavor that way, then extract the meat and save the shells.  This is such a fancy dish to make at home, your guests will oooh and ahhh as soon as you bring it to the table! It's also a great recipe for a romantic special occasion like an anniversary of Valentine's Day. For more romantic dinner ideas see my 7 Valentine's Day Dinner Ideas post. 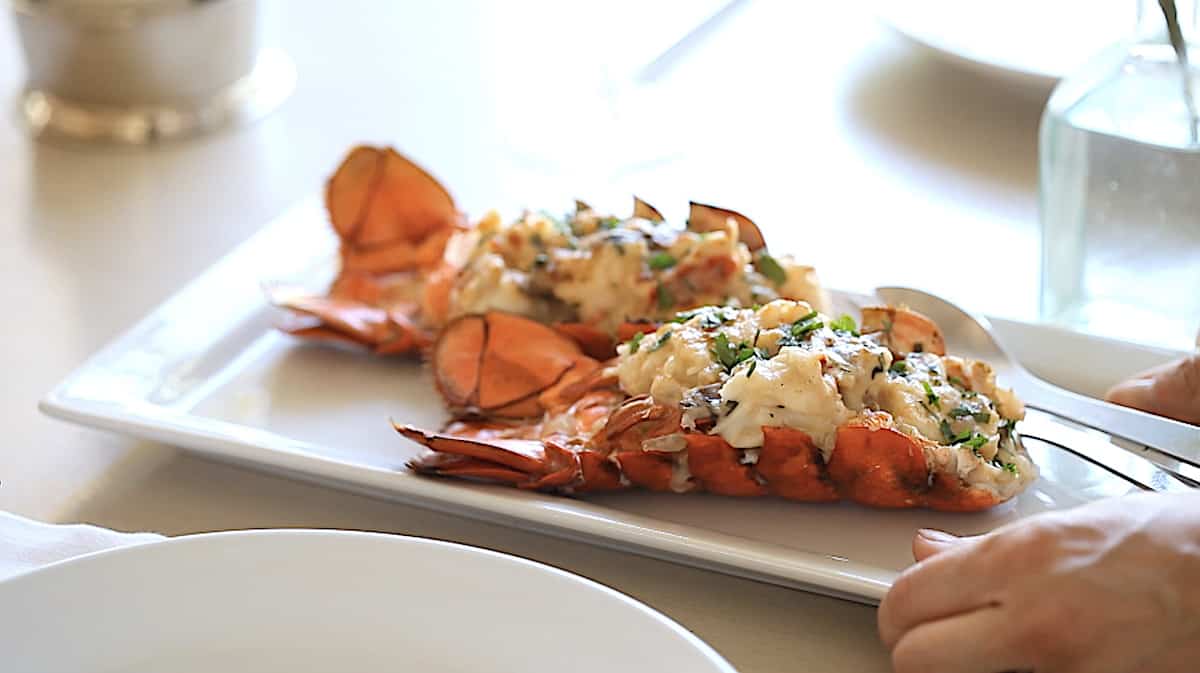 Then you'll sauté up some vegetables, add some sherry and reduce. You'll create a roux and add some fish stock, cook until a smooth sauce develops, add back in your veggies, lobster, heavy cream, and seasonings, spoon into the lobster shells, top with cheese broil, and serve! 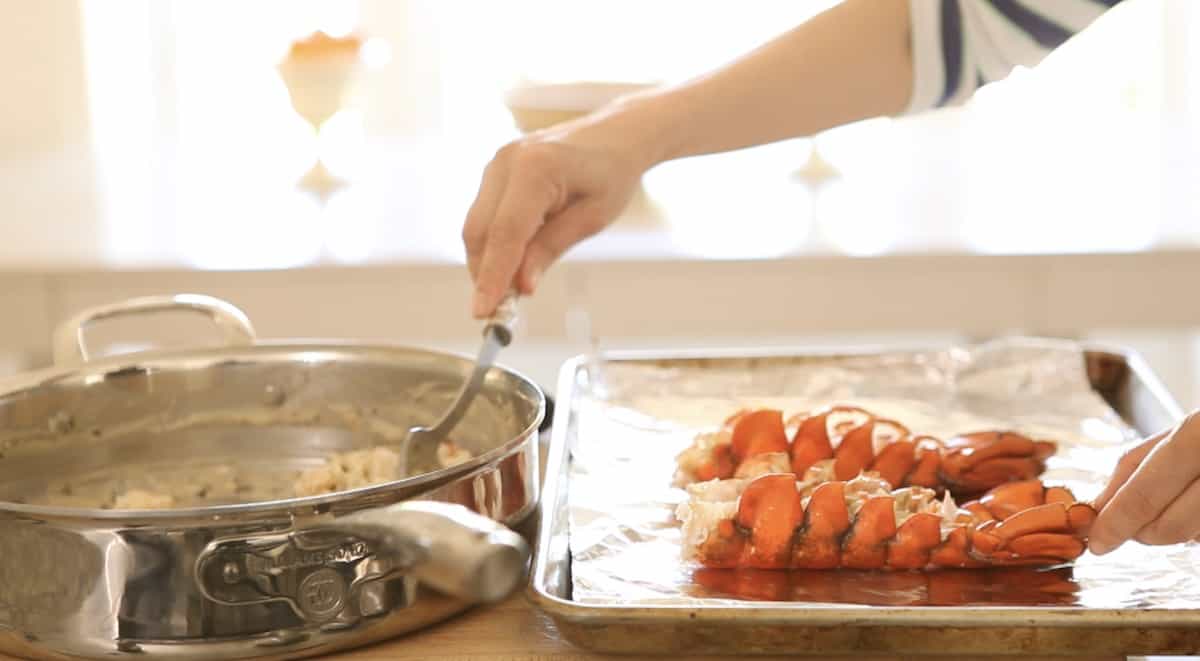 Step#1: Use Lobster Tails Over a Full Lobster

Lobster tails are not only more affordable, but they are so much easier to work with, especially if you are squeamish about boiling live lobsters. I also find the lobster tail meat is the tastiest part of the lobster too! 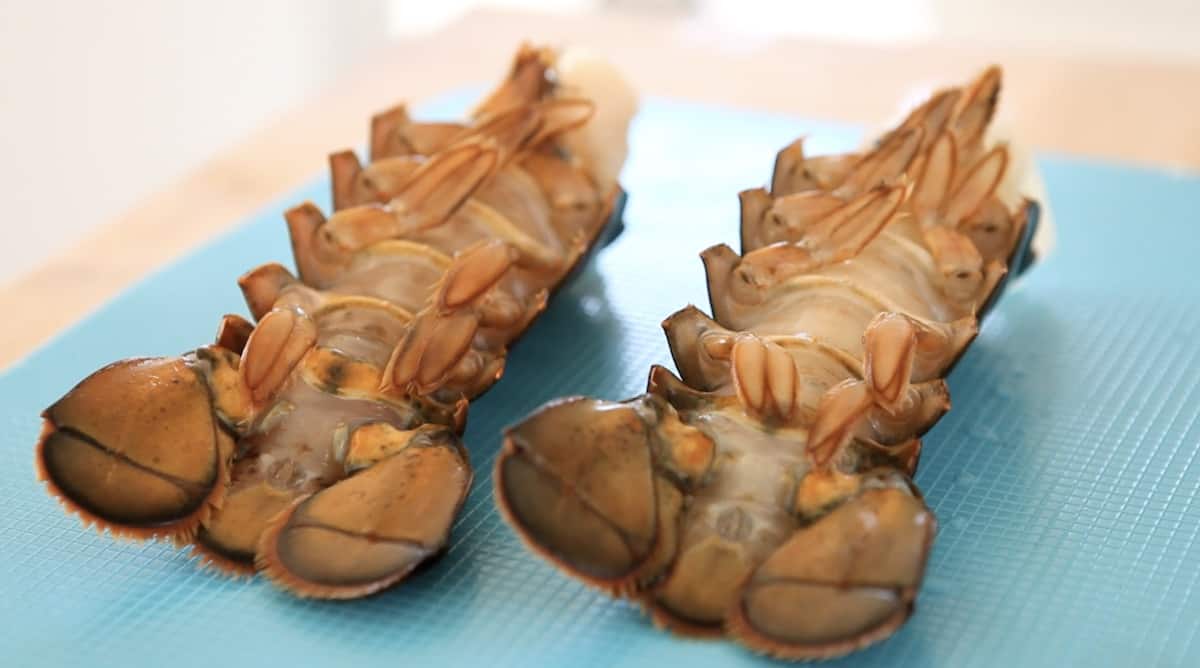 The other thing that makes this recipe easy, is the lobster is roasted, over steamed or boiled. At 400F it only takes 15-20 minutes. This part can also be done a day ahead, and once cooled you can store the tails in the refrigerator until ready to pick out the meat and serve. 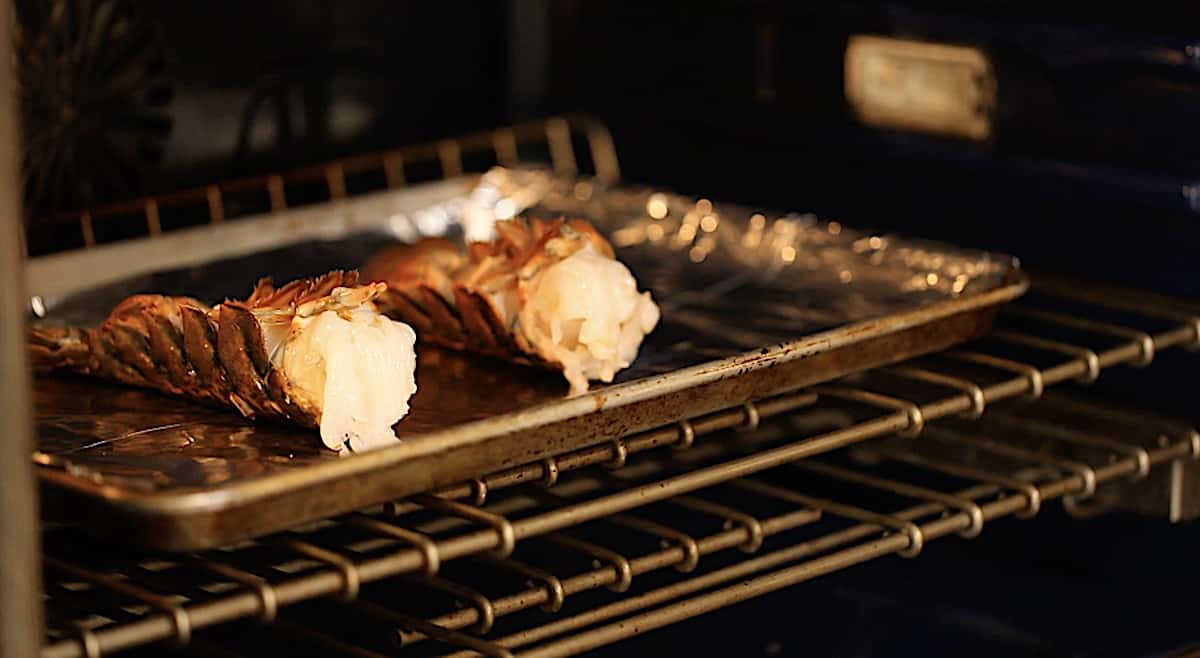 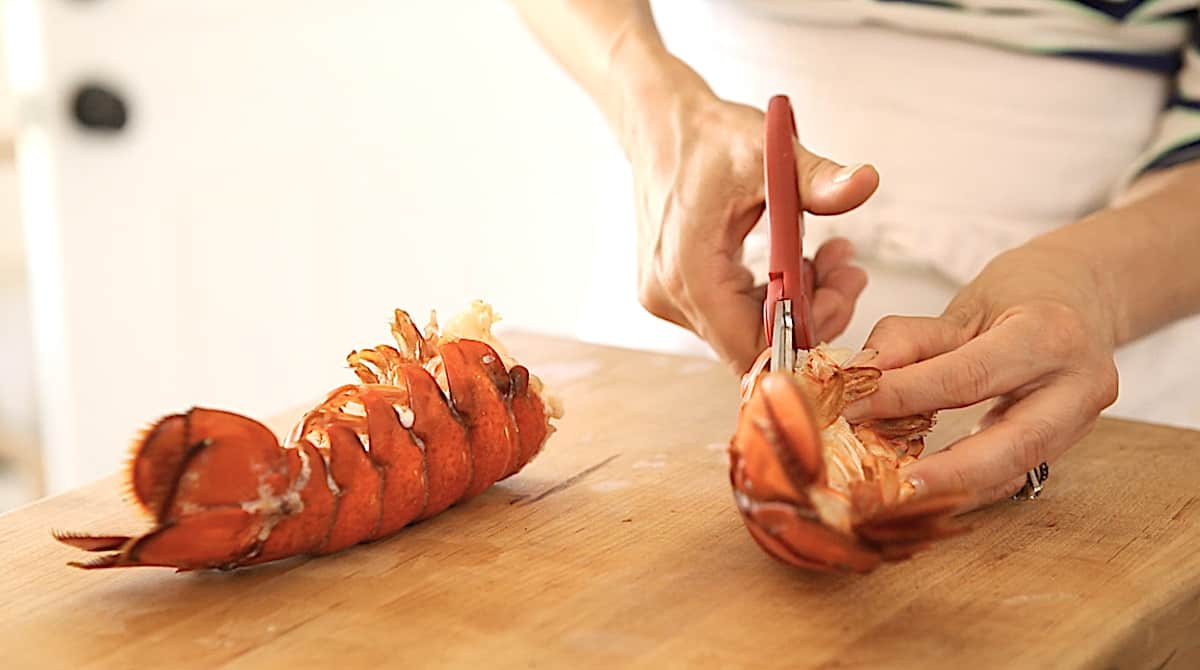 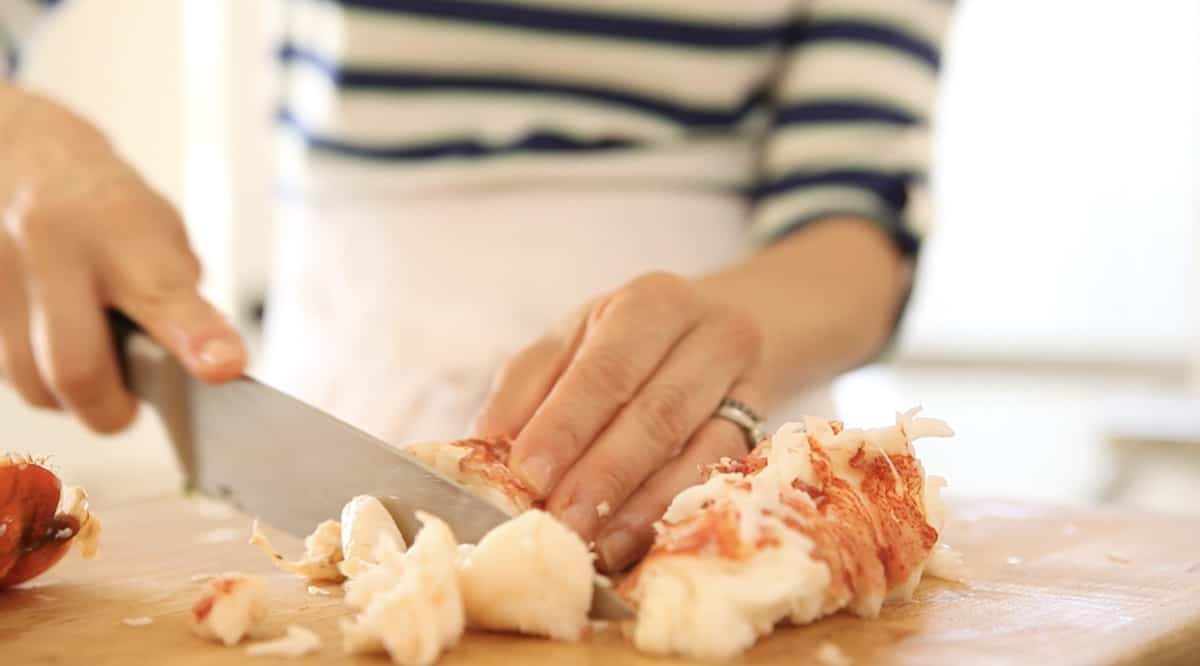 Lobster thermidor sauce is a creamy flavorful sauce that includes, shallots, mushrooms, sweet sherry, a butter/flour roux, and fish stock. You can also choose to add some fresh herbs, I think fresh tarragon pairs beautifully with the sweetness of the lobster meat.

In a large skillet, you'll saute the shallots first until fragrant and translucent. Then you'll add the mushrooms and continue to cook until both are soft. 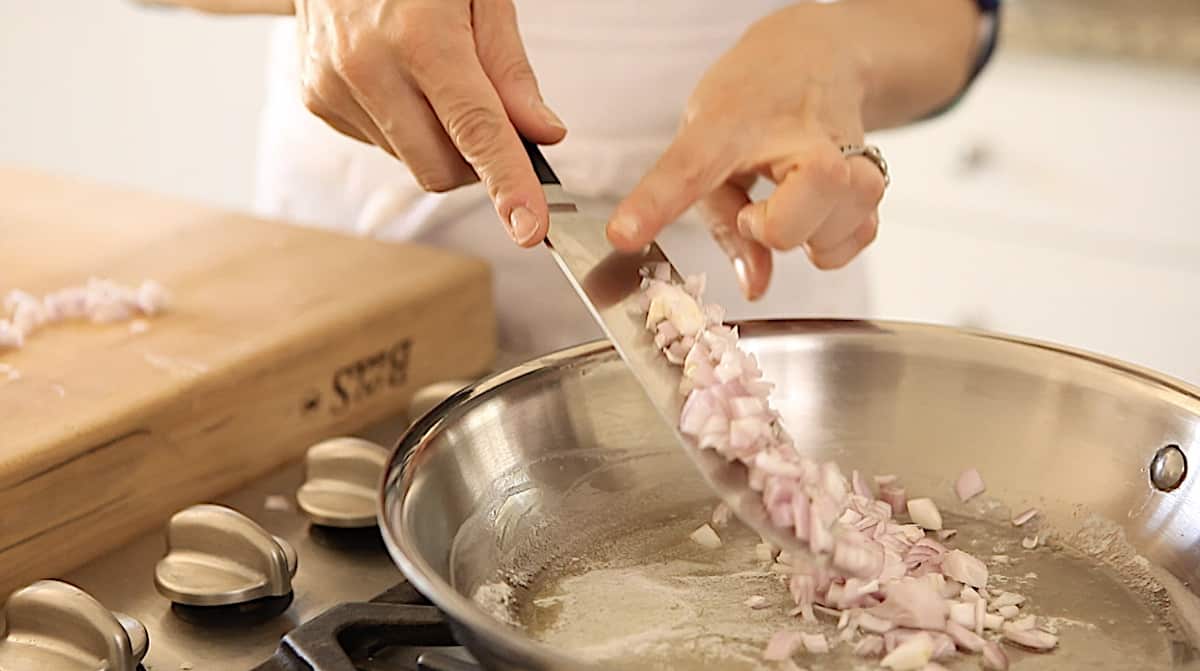 Slicing the mushrooms yourself will create a much thinner mushroom slice which will create a better texture for your lobster thermidor sauce, and allow the lobster meat to be the most dominant piece in the sauce. 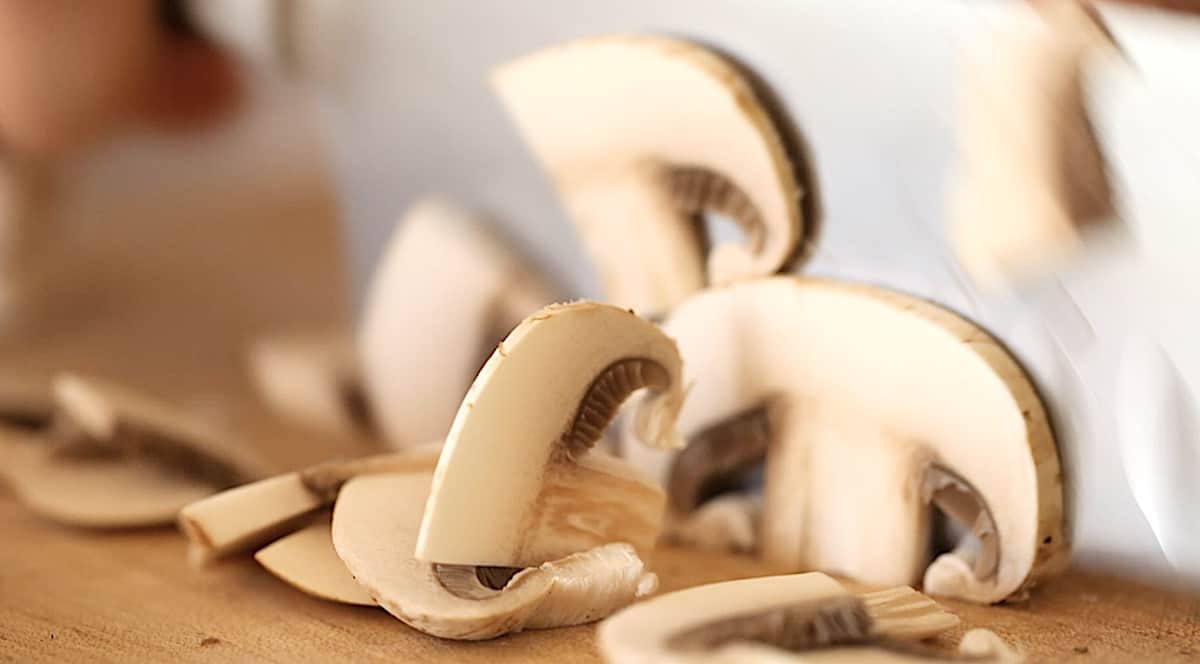 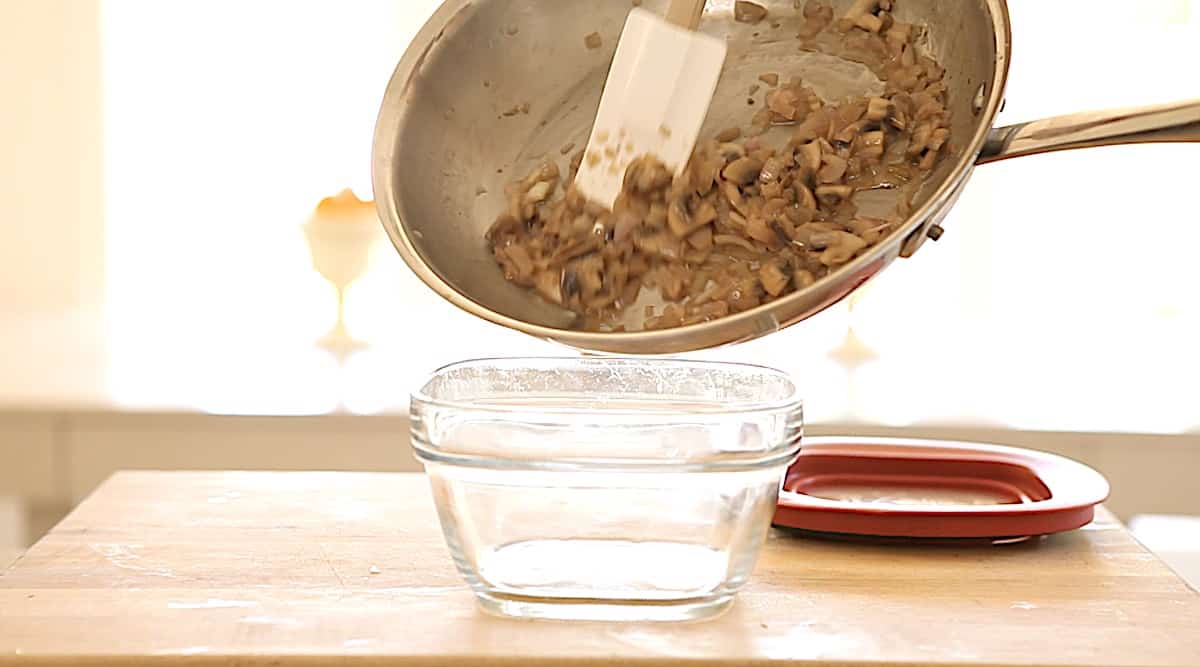 The day you plan to serve the Lobster Thermidors, all you'll have to do is make the sauce add the shallot and mushroom mixture, and the lobster meat.

The base of the sauce is a roux, which is created with butter and flour and then thinned with fish stock and thickened with heavy cream. Once the mushroom and shallot mixture is added back in, you'll add the lobster meat. 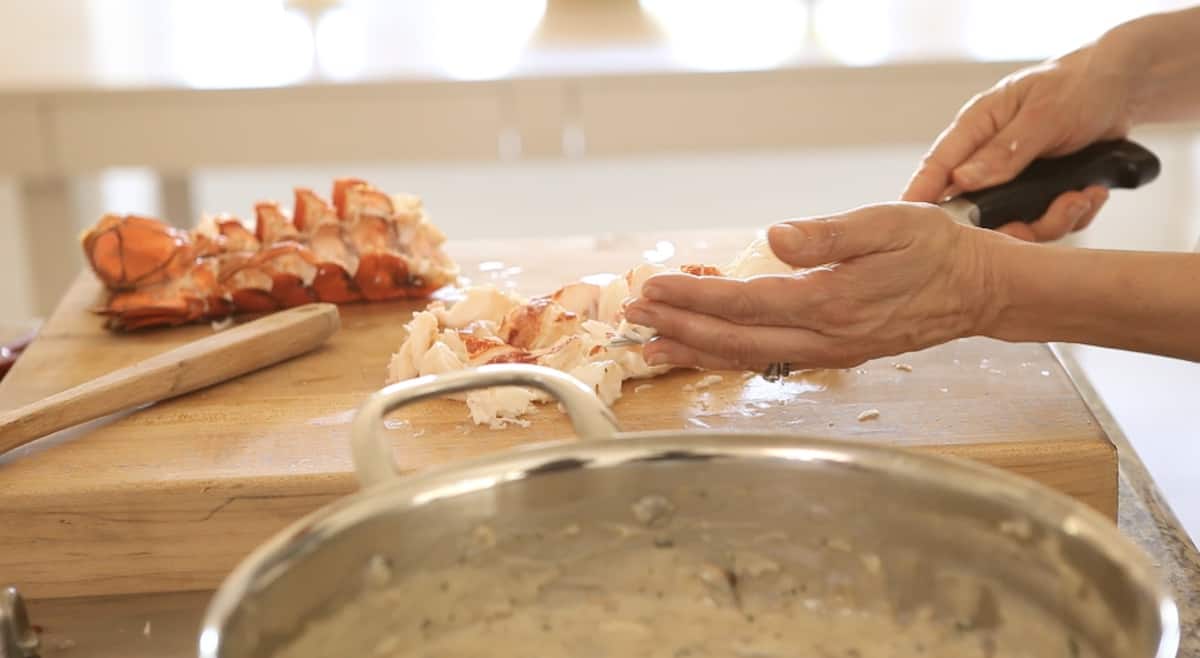 Once the sauce is ready and the lobster meat has been warmed through, spoon the mixture back into the shells. This is the ta-da moment that guests will really enjoy! But if some reason your shells were damaged in the prep you can also spoon the mixture in shallow gratin dishes too.

It's also nice to add a little freshly grated parmesan cheese on top to allow the tops to get nicely browned and crispy. 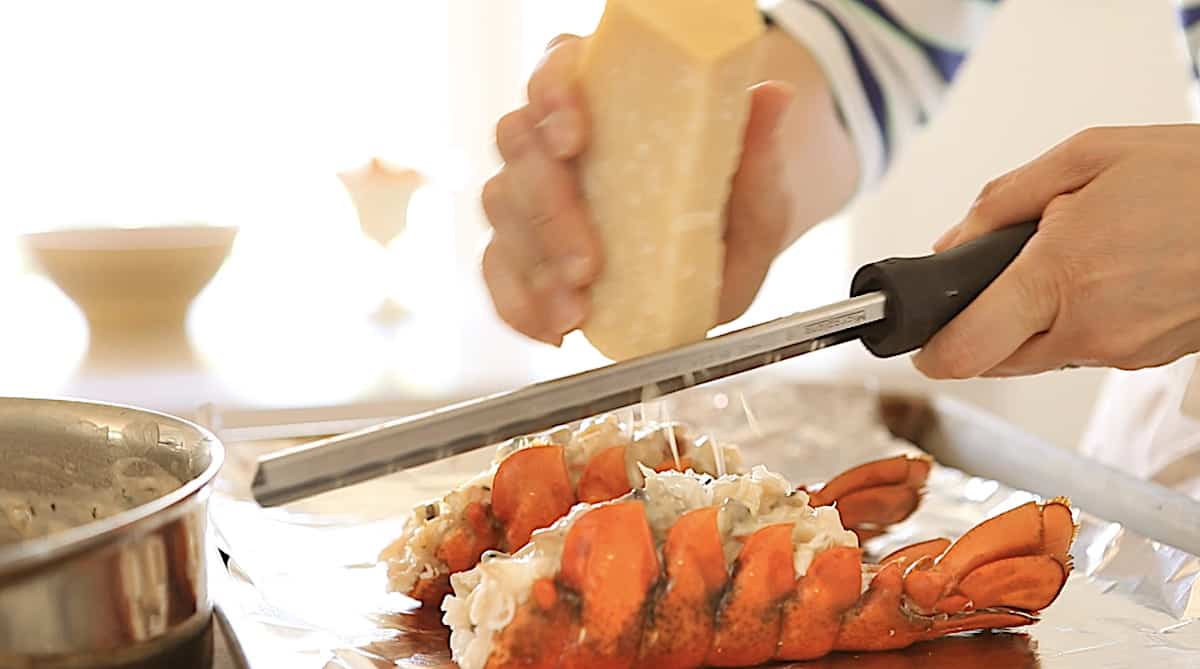 Then add a little freshly chopped tarragon for some greenery and freshness. It's also a nice compliment to the richness of the sauce. 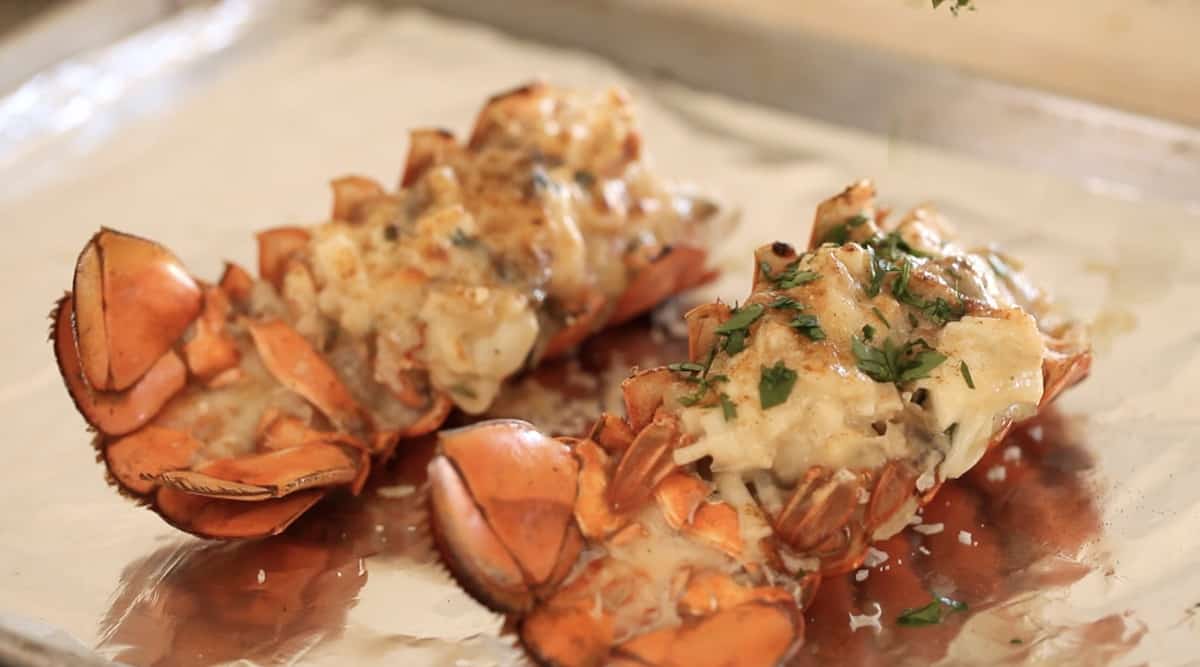 Side Dishes to Serve with This Recipe: 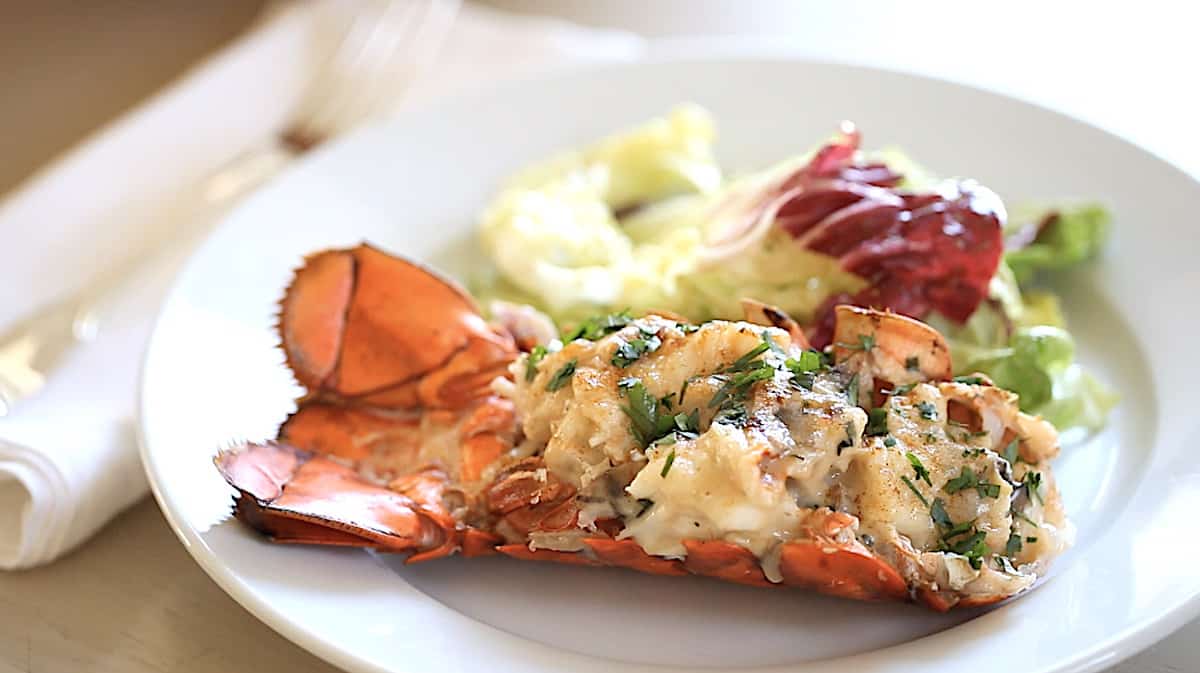 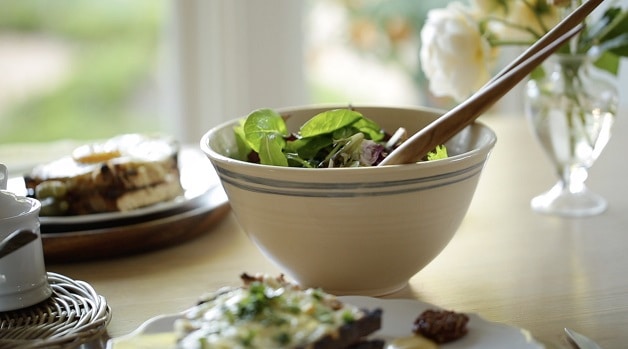 One of my favorite white wines to serve with this dish is either a Sauvignon Blanc or a Sancerre. I'm always amazed at the wide variety of Sancerre wines available at Trader Joe's! I can usually find a great bottle for under $15.00! 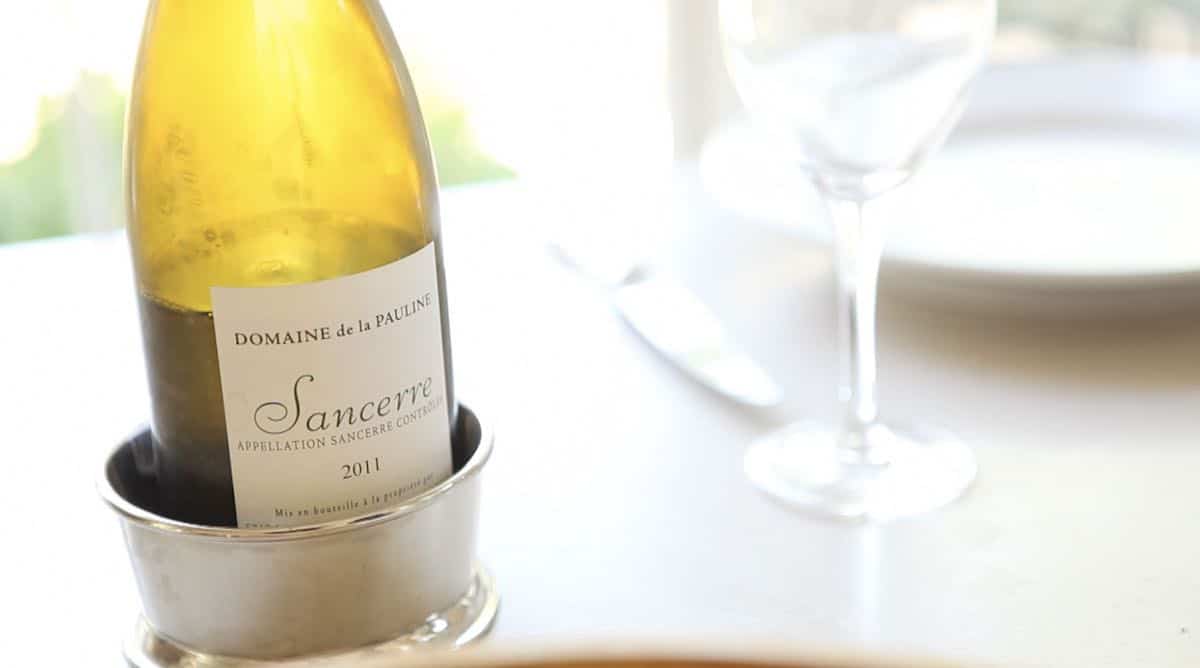 Please let me know if you Enjoyed this recipe

Serve with a crisp Sancerre wine. Trader Joe's has some great ones for under $15